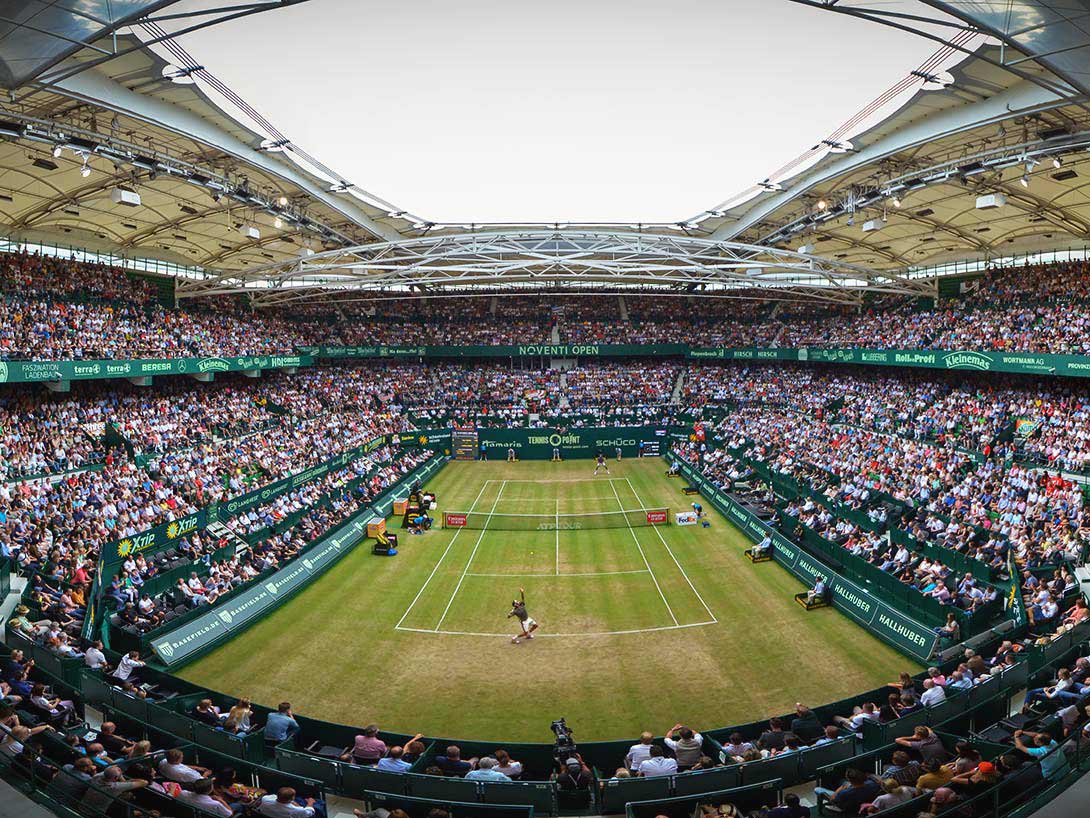 Where: at the OWL Arena, in the German city of Halle in North Rhine-Westphalia [formerly known as the Gerry Weber Stadium].

For more information on Halle please do visit the city’s official tourism website.

NB: due to changes in commercial arrangements, the tournament has previously been known as the Gerry Weber Open [until June last year] or the Halle Open.

Rightsholder: the official VIP Hospitality rightsholder of the NOVENTI Open is OWL Sport and Event GmbH. Your purchase contract will be direct with OWL; the DAIMANI price is exactly the same, with the same hospitality benefits as OWL with whom we work closely.

Why: There are very few professional tennis tournaments held on grass courts. Naturally those that are on grass are clustered around both the start of Wimbledon, and near at hand to the UK, to better serve those players getting ready for the calendar’s third Grand Slam of the year. So the 2021 NOVENTI Open finishes on June 20 and the first day of Wimbledon is June 23. It’s a perfect opportunity to see the fastest form of tennis played by the game’s greatest as they tune up for what many consider the biggest tennis tournament of the year. As an ATP 500 event, the winner receives just under US$ 430,000 and the beaten finalist US$ 215,000.

This may seem a strange point to start on, but bear with us. The title sponsor of the event is the Munich-based healthcare company NOVENTI Health Se. Their stated goal in their sponsorship was to help make the tournament ‘the most climate-neutral tennis tournament in the world’. NOVENTI had experts from the Focus Future Institute calculate the tournament’s total amount of CO2 produced, including the food and drinks consumed during the event. That total was around 13,600 tonnes of CO2. As well as supporting the organisers in switching out plastic cups at the tennis tournament beverage stands for sustainable, climate-friendly packaging solutions and disposable tableware made from renewable or recycled raw materials, NOVENTI compensated for the 13,600 tonnes produced by supporting a water project in Brazil under the sovereignty of the United Nations.

The tennis great’s relationship with this tournament is something else. This was where he won his very first grass court title, see below, in 2003 and two weeks later, on the back of his Halle Open title, he won his first Wimbledon title [which was also his first Grand Slam].

Often this can be an issue as many grass court tournaments are in so-called legacy venues. But the OWL Arena actually has its own train station, Halle Gerry-Weber-Stadion station, which is only 500m away from the venue entrance [down Roger-Federer-Allee]. The station is on the Osnabrück to Brackwede line with mainline connections to the Bremen and Minden lines respectively at the terminus stations. For train-spotters there is particular delight travelling this line as your train will climb a 1:50 gradient as it passes through the Teutoburg Forest, which gave much inspiration to the composer Johannes Brahms on his long walks, with the former Hankenberge station a 177 metres above sea level and situated close to the highest point of the line.

The tournament operates with two courts, the main court enjoying the benefit of a roof that can close in just 88 seconds [to give you a comparison, Wimbledon’s centre court roof can take upto 10 minutes to close]. As well as hosting the NOVENTI Open, the venue has also staged Davis Cup home matches, major handball major events, ice skating shows and the German Volleyball Cup finals– as well as a constant stream of high-class concerts.

Graf is the Lion Queen of German Tennis and won more Grand Slams on grass [six] than any other format. Her game was particularly suited to the ‘fast’ grass used during her time which played to her low backhand slice. That the nature of Wimbledon’s grass surface was changed around 2001 to improve bounce is what feeds into the endless debate as to who would win in the fantasy match-up between Graf and Serena Williams’s power game. The NOVENTI Open tournament organiser has said it remains his life mission to get Graf to reprise her appearance in 2011 in a veterans’ mixed double match which took place during the tournament in 2011.  We could only find handheld mobile phone coverage, so apologies for that, but Graf’s reception by the crowd is brilliant.