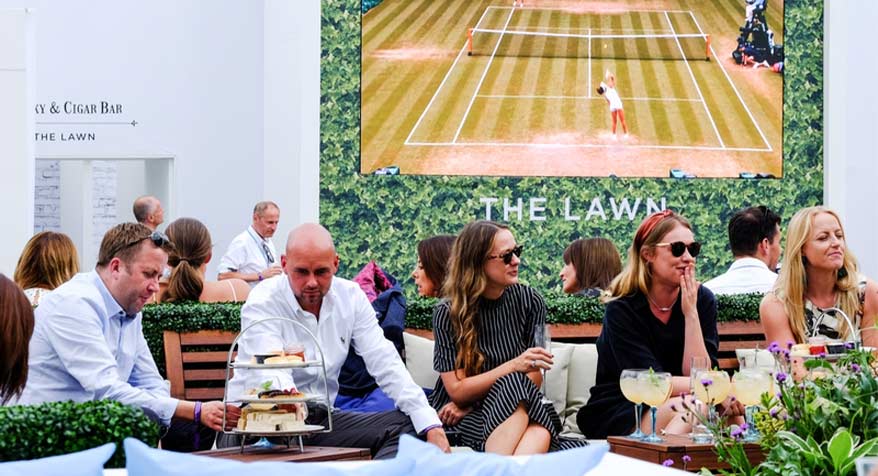 Charlie Charters Apr 06, 2020 0 Comments
The earliest known form of insurance dates to 1754 BC when the Babylonian ruler Hammurabi set out, amidst almost 300 other rules, a first, basic insurance concept covering events like disability, death or flooding that prevented a debtor from paying back borrowed money.

Fast forward around 3750 years and it was an offspring of Hammurabi’s very first insurance cover, allied with the wisdom of the All England Lawn Tennis Club’s Risk and Finance subcommittee, that has provided some financial cushion to the AELTC’s decision last week to cancel outright this year’s Wimbledon.

It has been widely reported that going into this extraordinary year, the AELTC was the only one of the four tennis Grand Slams to have specific pandemic coverage.

This has been a cost item to the AELTC of around GBP1.5m a year in premiums – which Wimbledon has been paying out since committee members first reacted to the possible havoc that a pandemic could cause after the SARS outbreak in 2003. Prior to that the tournament held cancellation insurance, predominantly for weather-related risks and a ticket-refund cover. But that weather-related risk has now been mitigated significantly with the centre court’s unique retractable roof.

Although media reporting has talked of a GBP100m payout, the DAIMANI Journal understands from insurance sources within the industry that the final figure could be closer to, and even in excess of, GBP150m.

To see how insurance cover is discussed and negotiated ‘at the box’ at Lloyd’s click below [exactly the process that those writing Wimbledon’s insurance cover would have followed].

Again the same sources have told the DAIMANI Journal that one of the companies with significant exposure under the Wimbledon cancellation policy is Hiscox, who may have led the placement of that specific insurance cover.

To be clear, Wimbledon’s policy was bespoke: just how bespoke can be seen by looking at Hiscox’s terms for event cancellation cover as shown in the FAQ section of their event insurance website and updated since the coronavirus has entered our consciousness.

The DAIMANI Journal has highlighted some of these key elements:

It's not clear when exactly Hiscox updated these terms and conditions to so explicitly exclude coronavirus claims.

For the insurance market, April 1 is a critical date as it is the start date for many of new policies. The Financial Times reported on March 31 that ‘insurers have been closing any remaining loopholes on contracts that are up for renewal to try to reduce their exposure to any future costs.’

‘They are rushing out a whole series of exclusions in all kinds of different contracts,’ said Bruce Hepburn, chief executive of Mactavish, a claims specialist, told the FT. ‘The big worry is that these are very broad exclusions.’

‘They are making sure not only that they were not on the hook when [the outbreak] happened, but that they won’t be on the hook at all. It really doesn’t feel like they are sharing the pain,’ he added. There is nothing to suggest that Hiscox is one of the insurers the FT report references.

The insurance industry’s response, according to the FT report, is that their hands have been forced into writing these new exclusions by requests for information from rating agencies and regulators about how big the industry’s exposure to coronavirus-related claims could be.

Looking across the whole insurance market for event cancellation, The DAIMANI Journal understands these are some of the impacts that can already be observed:

The final figure that Hiscox and others in the insurance market will pay out is still subject to calculation and negotiation. It’s a complicated and sometimes adversarial process. Although GBP230-250m revenue was anticipated for the 2020 event, by not staging the event the AELTC will be making a significant cost saving because there is no prize money, construction or match-day staffing expenses to pay out.

Explaining the insurance cover, Richard Lewis, the All England chief executive, was far from triumphant: ‘Of course we are fortunate to have insurance. It helps but it doesn’t solve all the problems.’

Lewis, who joined Wimbledon in 2012 from the Rugby Football League, is a former tennis professional with a highest world ranking of 68 and was a Davis Cup regular for Great Britain. This summer’s event is due to be his last before retirement.

This is Lewis, interviewed in 2018, talking about the tournament’s history, in particular Wimbledon’s role in introducing ‘Open’ tennis.

Watching the insurance negotiations keenly will be the sport’s governing body in the UK, The Lawn Tennis Association. Much of their work is paid for by the profits from Wimbledon: £30-40 million per year, calculated as 90 per cent of the tournament’s surplus.

Amongst the many LTA initiatives that the Wimbledon surplus is invested in, the best known is The Player Pathway which looks to develop British champions of the future: players from 7-14 years are identified and coached, and can progress to the Pro Tour Stage which usually starts at age 14. The final stage is for those singles players who reach the world's top 100 and doubles players who reach the world's top 32 in the ATP/WTA rankings.

Here are some of those stars of the future, at the LTA’s National Tennis Centre, trying hard to use their tennis skills to get into the spirit of Christmas.

In other tennis-related news, the Wall Street Journal featured tennis pro Milos Raonic in their regular column ‘How I Cope’: Raonic talks candidly about the cooking skills he is learning, and how tough it was for him deciding not to return to his native Canada to see out the coronavirus with his parents.

‘When I’m on the road, I’m either eating in restaurants or in hotel rooms that don’t have access to kitchens. In the off-season, I train for seven hours a day so it’s easier to have food waiting for me when I finish a session. But this is my chance to get confident in the kitchen. I’ve been making a lot of pan-seared fish and veggies—really simple stuff that doesn’t involve lots of pots and pans as I don’t like cleaning up …

‘My mom and dad live in Toronto. I thought about flying to be with them when everything started shutting down but they’re in their 60s and it didn’t feel like the right thing to do. However, now that my days have slowed down, I’m able to keep in touch with them much more than normal. Usually when I have time off, I’m on the other side of the world to my family and I’m struggling with jetlag but right now, I have long windows of time to FaceTime them which, for me, is one of the best things to come out of this very difficult period.’

DAIMANI works with Keith Prowse, the exclusive official rightsholder of the Wimbledon hospitality programme, and part of the FTSE-listed Compass Group. Just a reminder of what awaits you in 2021!