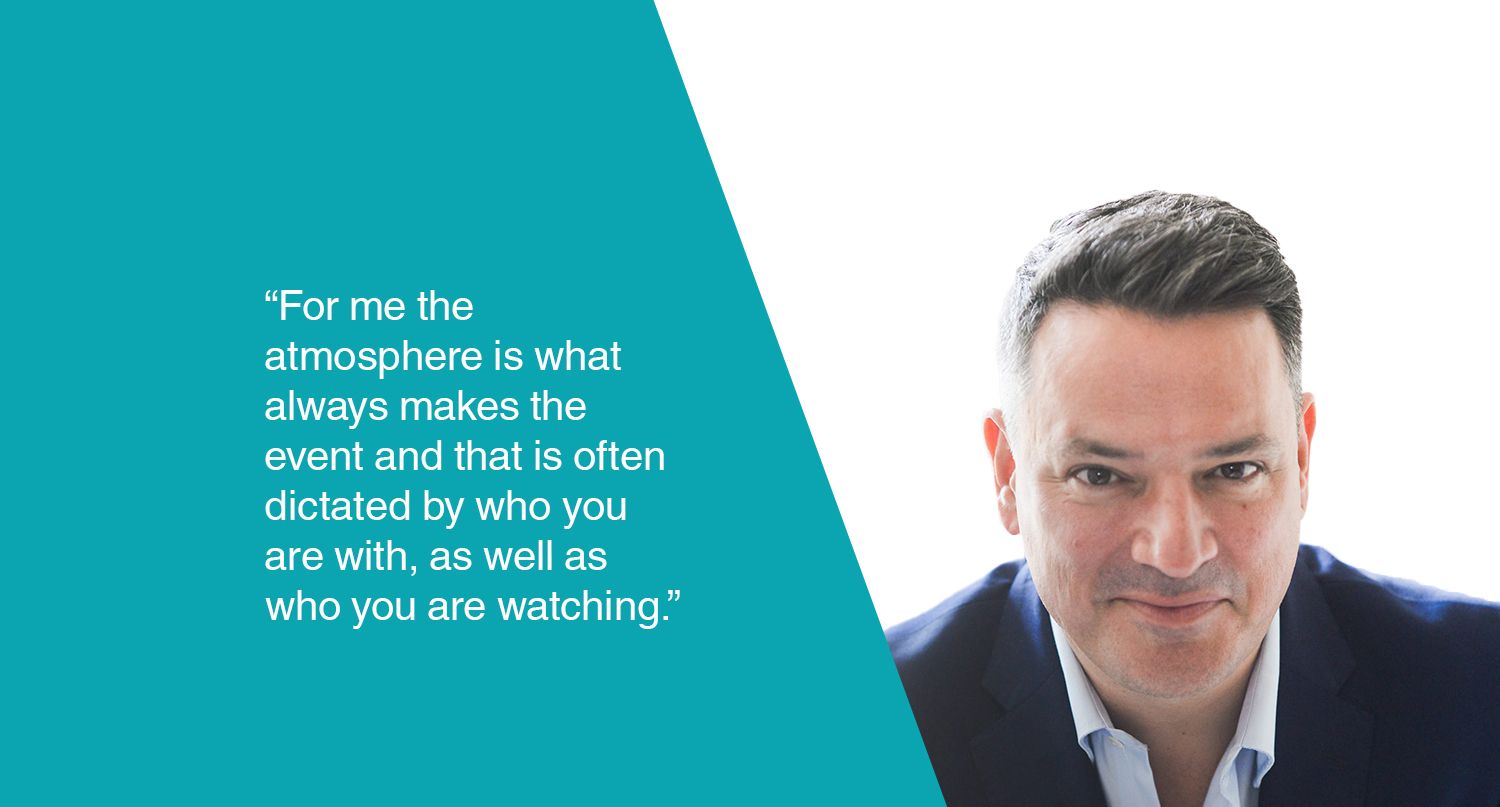 Murray Barnett recently left Formula One after three years as their head of Global Sponsorship and Commercial Partnerships. One of the last deals for F1 he helped land was the reportedly US$ 40m a year partnership with Saudi oil giant Aramco.

Prior to that, Murray spent four years with World Rugby, latterly as their chief commercial officer, and had senior sales and management positions with ESPN, the NBA and ISL.

His father was a British Council diplomat meaning that his childhood included living in Turkey, Saudi Arabia, Egypt and Poland.

The Formula 1 Melbourne GP around 2000. I thought the whole experience was spectacular and totally unique. Official hospitality at Grand Prixes offer a level of exclusivity and access which completely set the experience apart from football or anything similar.

[DAIMANI Journal: The Schumacher brothers Michael and Ralf came first and third at the 2000 Melbourne GP with Rubens Barrichello second; the race was the first Grand Prix for future world champion Jenson Button.]

And what is your favourite Live Event that you would encourage everyone to book when it goes on sale, and what makes it so special?

This is difficult for me to answer as there are so many great events that each have different reasons for being so special. I love a Test match at Lord’s even though I’m not the biggest cricket fan. Lord’s is always a special atmosphere, quintessentially English and therefore totally unique. Wimbledon is another absolute one-off. For me the atmosphere is what always makes an event and that is often dictated by who you are with, as well as who you are watching (and if you care about them). My favourite venues include Camp Nou (especially taking my son to his first away game as a Spurs fan), Monza (the Italians and F1/Ferrari are a sight to see) and Fenway Park where you can feel the history in the rafters.

Most of what I’ve learnt came from three people connected to Disney — George Bodenheimer (President of ESPN), Bob Iger (CEO, The Walt Disney Company) and Sean Bratches (ESPN and my boss at F1). Bodenheimer had an amazing ability to remember everybody's name, even if he had met them only once. That’s a super power I would love to have. Bodenheimer and Iger were unflappable, and calm, logical people who trusted their staff but were not afraid to challenge them positively. Sean Bratches has a unique ability to deliver difficult messages in a very positive manner. He’s also an incredible motivator - you want to run through brick walls for him. All three of them treated work as a team effort with no hierachy or bullshit.

Being hired for a job I was not qualified to do at satellite broadcaster Orbit TV in Rome. To this day, I think they mixed up the CVs. In any event, once I started work there, I realised TV was/is largely about showing initiative with a modicum of applied intelligence. I was also fortunate that Orbit was a start-up which meant everything was chaotic so I was able to fly under the radar until I picked things up. Orbit got me onto the path into the Media industry, which lead to sports.

The Olympics and Commonwealth Games. I remember getting up early and nearly missing the school bus because I wanted to see who won between Mike McFarlane and Alan Wells in the 1982 Brisbane Commonwealth Games 200m final. It was declared a dead heat! Daley Thompson was a hero to me as well. I must have watched the whole of the 1984 Los Angeles Olympics from start to finish.

Elton John, Budapest 1983 I think. I absolutely loved it. That concert changed my life. I love live music and I’ve also seen Elton John at least 6 times since.

What do you remember — across all genres — as the most emotional moment in television or film or a sporting event that has brought tears to your eyes?

Many moments make me cry! Even more as I get older. I well up everytime I see the Derek Redmond clip from Barcelona 92 with his father — and Redmonnd determined to cross the finish line even though he'd snapped his hamstring halfway through the race.

What was your childhood or earliest ambition?

To be a film producer like Ridley Scott or Simpson/Bruckheimer.

Which experience had the biggest impact on your life and how you see the world?

Breaking both my legs when I was 17. I was hit by a motorbike in Greece. It made me want to live for each day and ironically made me more comfortable in my own skin.

If your 20-year-old self could see you now, what would he think and what advice would you pass back to your younger self?

I don't think I would have expected to have had such an interesting career let alone one in sport. I don’t have any regrets but I would always tell my 20-year-old self to grab every opportunity and experience all that you can in life.

What is an example of karma that you experienced in your own professional life, and which you would use as a cautionary tale to others?

No specific example, but those that have had long and successful careers in the sport business have always treated people with respect and used their position to support and help others. Don’t take yourself too seriously.

What is your favourite rule to break?

I eat badly. Too much, and too much sugar.

Which minor character in either real-life, history or fiction do you want to know more information about and why?

I’m fascinated by characters and people who are have a flawed genius in some way. Examples would be Lance Armstrong, Eric Cantona, Bill Clinton.

What is an indulgence you could never forgo?

I love smoking. Although I gave up a number of years ago, I do fall off the wagon occasionally.

Tell us something even your colleagues might not know about you …

I used to promote house music events in London.

Ronan Farrow’s Catch and Kill; Red Notice: A True Story of High Finance, Murder, and One Man's Fight for Justice by Bill Browder, The Force by Don Winslow, and anything by William Boyd or John Niven - I reread both of them regularly.

Who is your favourite new artist?

What are the most rewarding podcasts you follow and why?

The Unofficial Partner podcast - great people in the sports business sharing their views or their story, The New York Times app has great features and has a different perspective compared to UK newspapers, and the You’re Dead To Me history podcast.

Inshallah (If God wills it) and Ma’alesh (It doesn’t matter). Both Arabic. The literal translation is insufficient to convey the depth of meaning!

If you’re awake at 2am what is it generally that you are worrying about?

iPod/iPhone - something on which to play my music.

If you’re awake at 2am what is it generally that you are worrying about?

Not a problem. I sleep heavily.

What have you always really dreamed of doing or being, but are resigned to the fact you will never achieve?

Still trying to write a novel.

What is the first sentence from the best novel to be written about the coronavirus?

They thought it was nearly over, it was just the beginning...