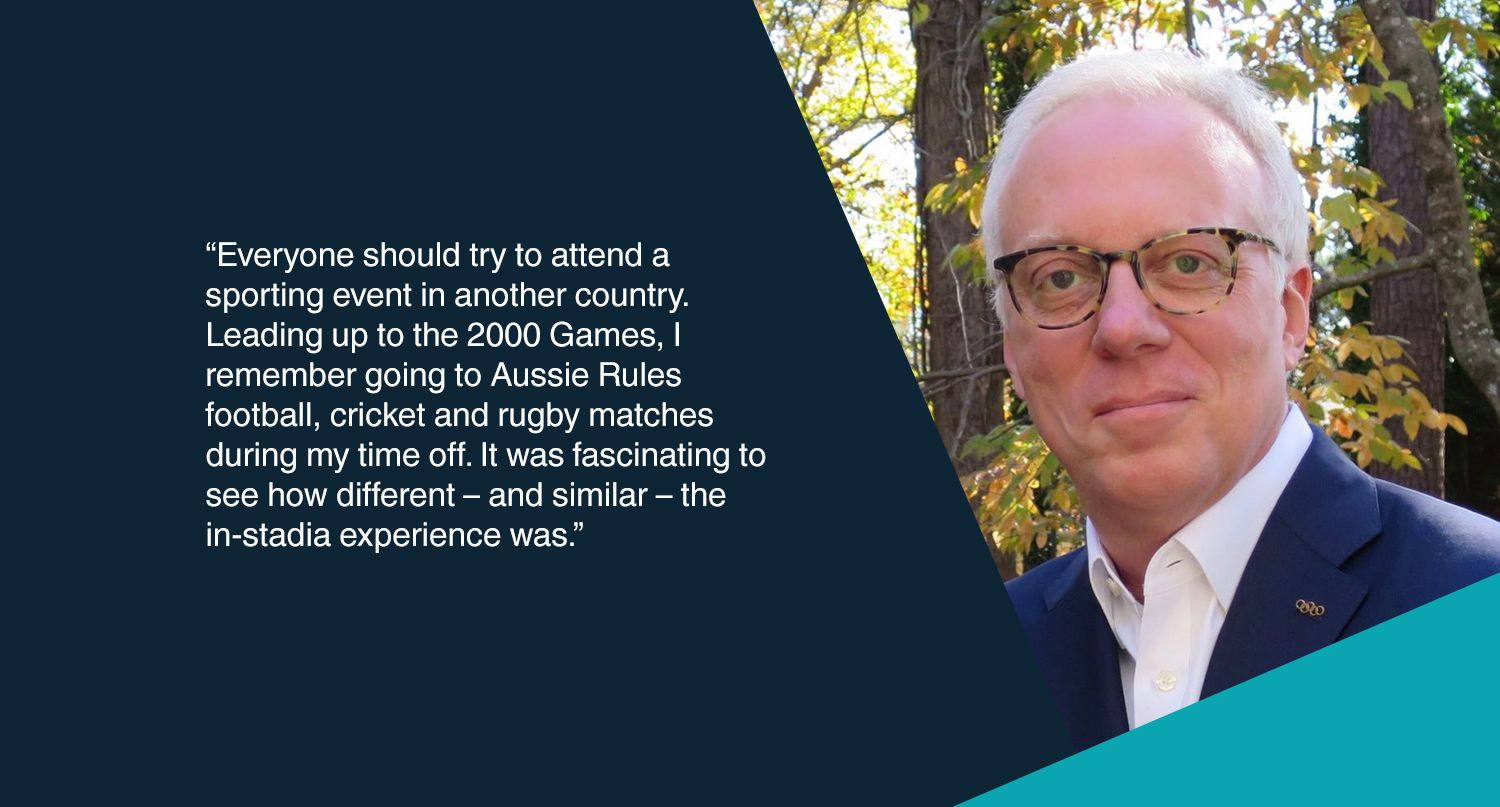 If Terrence Burns is in your corner then the chances are that’s because you are bidding to host a major event like an Olympics or FIFA World Cup. As a consultant, he’s played lead roles in the successful bids for Beijing 2008, Vancouver 2010, Sochi 2014, PyeongChang 2018, Los Angeles 2028 and the FIFA World Cups hosted in Russia in 2018 and the 2026 ‘United Bid’.

His ‘day job’ title these past two years is executive vice president with the Engine Shop Agency, a Bruin Sports Capital company. But his 26-year career in global sports began managing Delta Air Lines’ sponsorship of the 1996 Olympic Games in Atlanta. After the Games, Terrence helped create the IOC’s then-new sponsorship agency, Meridian Management SA, which managed the IOC’s TOP commercial sponsorship programme until 2001. He is the founder and owner of two Olympic-specialised agencies, Helikon and Helios Partners, where he worked on a total of 11 Olympic bids as well consulting to dozens of Olympic sponsors at the IOC and OCOG levels.

The Super Bowl in Miami in 1995. It was the first time I experienced ‘how the other half’ lives. Amazing experience before, during, and after the Game. The NFL and their sponsors understand the product, and how to maximise the value. I was a bit intimidated knowing that the next year (1996) we would have to prepare for and execute a Super Bowl-level hospitality programme every day for 17 days with the Olympics.

I think everyone should try to attend a sporting event in another country, or, one that may not be one’s favourite sport in one’s own country. When working in Sydney leading up to those Games in 2000, I remember going to Aussie Rules football, cricket and rugby matches during my time off. It was fascinating to see how different – and similar – the in-stadia experience was at each as compared to US professional sporting events.

The best boss I ever had was a lady named Judy Jordan, at Delta. She was my direct boss when I managed Delta’s sponsorship of the ‘96 Games. Judy was an incredible combination of an analytical and a creative mind…up to that point, I had only dealt with analytical bosses. Judy taught me to trust my gut and don’t be afraid (or ashamed) of being bold.

2) taking on the Delta sponsorship of the ‘96 Games and

3) then leaving a fifteen-year career at Delta, where I’d just reached the director-level, to work for a start-up serving the IOC’s marketing agenda. I realised that I could put my education (MBA – International Business) to work in a real-time environment. Also, in the Olympics I’d finally found the one thing that allowed me to ‘follow my heart’. I’ve only worked in the US and with US clients about three or four years of the past 26 years. For me, working in and with other cultures tests one’s skills and patience like nothing else in business.

The Jam’s ‘A Town Called Malice.’  I just loved Paul Weller (and still do), the band and the song, and every time I hear it, I feel 24 again. ‘Stop apologising, for things you’ve never done because time is short, and life is cruel and it’s up to us to change this Town Called Malice.’ I love that line.

No contest: ‘The Immaculate Reception’; a spectacular catch by Franco Harris in the old AFC (American Football Conference) divisional playoff game between the Pittsburgh Steelers (my team, though I lived in Atlanta) and the Oakland Raiders on December 23 1972. It’s an impossible catch off an improbable pass that bounced off another player in the last seconds of the Game. Sport at its best.

Steppenwolf at Georgia Tech Alexander Memorial Coliseum on May 14, 1970. I was 12 years old and my friend’s dad took about five of us kids to the concert. We got to sit on the stage (facing the crowd) and actually went backstage and I got John Kay’s autograph. That was the moment I understood about guitars and girls – invaluable.

Well, I tear up about a hundred times during every Olympic Games – I mean, the human stories are so powerful and real. The Games have never been about sport – they are about the universal values of humanity. Carrying the Olympic Flame in Atlanta on the morning of Opening Ceremony was probably one of the most emotional moments of my life tied to an event. I had been working on the Delta Olympic sponsorship for almost three years – at times it was exhausted and frustrating. I was ‘over’ the Olympics. Then I ran with the flame. It cemented my decision to go to the IOC and I’ve never looked back.

Delivering cans of Charles Chips (potato chips) door to door for $1 an hour. I was 11 or 12. My Dad always ensured I was employed at something from that point on as long as I lived at home. I remember being paid (in cash) and I was astonished that someone would actually give me money just to have a good time with my buddies on the weekends. I thought all my jobs in the future would be as fun. I was wrong.

My folks were children of the Depression. They worked hard. Lived within their means. Didn’t complain. And were humble and grateful for all they achieved. My Mom was the disciplinarian and my Dad a bit of the dreamer. He read and ‘learned’ voraciously, and I think that sense of curiosity eventually led me to living in Moscow by myself in 1992 – and being enraptured by it all. ‘Be Adventurous’ was our motto.

Take education more seriously, earlier. I was a very late bloomer academic-wise. Study more, play less would be my advice to a 17-year old me

‘Thank you’ in any language…I do speak German (a functional illiterate) but the language I love to listen to is Italian.  So, ‘Grazie’, I suppose is the answer.

‘Alison’ – Elvis Costello. #2 is ‘Ain’t Too Proud To Beg’ The Temptations.

What is a compliment that you really wish people wouldn’t give you?

Taking off from Moscow to St Petersburg in August 1992 on an old Aeroflot plane, overbooked, with people without seats standing in the aisles and holding onto anything and anyone. I took the overnight train back on the return.

What was the new technology or device that you immediately understood was going to be life-changing and how has it/did it impact your life?

The iPhone in 2007. Suddenly we went beyond laptops to ‘palm tops’ …it was an amazing leap and that’s hard to comprehend for young people who’ve never worked without a smartphone. It made my years of two international trips a month much easier to manage. I realise some folks lament the march of tech in our lives; not me, I love it.

Do you believe in science?

‘Factfullness: Ten Reasons We’re Wrong About the World and Why Things are Better Than you Think’

I love the quiet time and being alone in it.

What non-curriculum subject[s] should be required for anyone leaving school or university to understand fully before they enter the workforce?

a.  Rational thinking and judgement

If someone gave you a box that contained everything you have lost in life, what’s the first thing you would search for?

My mother’s parents. They took me in at birth for the first ten months of my life due to my Mom’s illness. They were 68 and 69 respectively, and had 9 children of their own with over 20 grandchildren at that time. I owe them everything for that.

What is your worst habit?

To quote The Goo Goo Dolls, for you, ‘… the closest to heaven that I'll ever be …’ is where, with whom, when and doing what?

With my German wife, eating German sausages and drinking German beer in an outdoor beer garden in Bavaria.

During this lock-down what are the things you’ve come to value most by their absence from your life and how will you put that right when this over?

Honestly the lock-down came along at a time in my life where I am not too inconvenienced by it. We moved to Santa Fe, New Mexico last summer so staying close to (our new) home has been a good thing in a strange way. I honestly don’t think about the lock down. I’ve worked virtually for most of my career, so this isn’t anything new. I do miss eating out – I love great restaurants and Santa Fe is a foodie town. But…as soon as I feel comfortable to travel again we are off.

What have you learnt about yourself in the coronavirus lockdown that has most surprised you?

That I am ‘OK’ not being on an airplane.

What is a major issue that over time you have changed your mind on, and why?

The importance of patience.

What is the darkest, most unsatisfactory and on-going issue you have seen or experienced in your business?

Cheating in sport…on and off the field of play. I hate it.

You get to fly anywhere after the coronavirus to take a trip you’ve always wanted to make: Where are you going, with whom and what are you planning to do?

I’d like to go to Turkey and re-trace the campaign of Alexander the Great, but on a motorcycle. My wife can follow me in a rental car.

Can you sell more tickets by actually offering less?