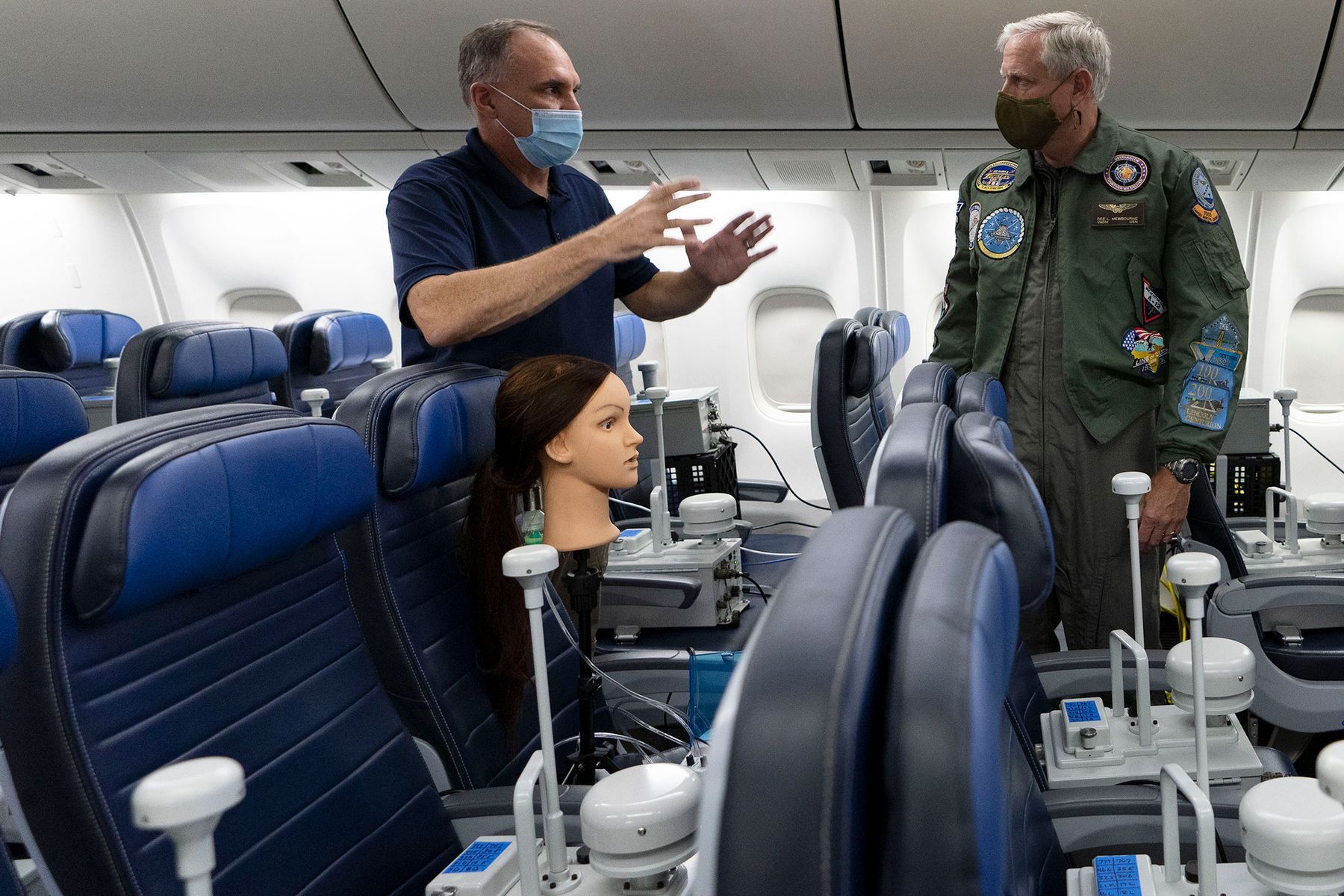 Bloomberg’s aviation and aerospace reporter Justin Bachman broke a fascinating story yesterday about a four-month cooperation between United Airlines and Boeing, overseen and paid for by the US Department of Defense, that has ‘jetliners loaded with mannequins, aerosol sprays, sensors and scientists [flying] in an effort to understand how contaminated air moves through passenger planes.’

The issue for all of us involved in the official VIP Hospitality business and the wider travel industry is that there is a fundamental lack of knowledge about one very simple issue that is damping down customer demand: what are the chances of infection if a person sitting next to you or across the aisle breaks out into a virus-laden cough?

At The DAIMANI Journal we have shared a number of significant stories about the efforts made to give peace-of-mind to international travellers, including from vlogger Sam Chui as he helps an Etihad crew deep-cleanse one of their jets.

The airline industry response to date has been different versions of the Sam Chui story: reassuring the public that flying is safe by implementing an array of onboard cleaning and disinfecting procedures, requiring face masks in the cabin and improving ventilation and filtration systems. See Emirates’ version below:

But, again, what many nervous potential flyers seem to be fretting about is not the machinery they’re travelling in but the humans they are with, hence the overriding question remains: what are the chances of infection if a person sitting next to you or across the aisle breaks out into a virus-laden cough?

Frustratingly aerosol particles behave differently under different cabin scenarios, said Byron Jones, an engineering professor at Kansas State University who studies airline cabin air and was not involved in the project. Gas and particles in a cabin become ‘a witches’ cauldron,’ he said, based on air flows, particulate sizes and other factors. ‘It just swirls and churns and twists. It’s very chaotic,’ he said. But that churning isn’t necessarily a bad thing: ‘That’s what you want to see in a general ventilation (system).’

As the Bloomberg article noted US demand for flights remains at less than a third of 2019 levels, based on airport security screening data.

The estimated USD1m cost of the study is being funded and led in part by the US Transportation Command, based at Scott Air Force Base in Illinois, which buys airline seats and charter flights to transport American troops and their families around the world.

The logic of the US Transportation Command’s involvement is that they want to be able to safely mobilise troops, said Lieutenant Colonel Ellis Gales Jr., a spokesman. Companies including United, Boeing and Zeteo Tech LLC, a Maryland-based biodefense and medical device maker, are contributing equipment and expertise.

The hope is that the study can show how likely it is for a passenger to be infected by breathing the air on a plane, and if they can crack that then, ‘it’ll probably drive some policy decisions,’ said Mike McLoughlin, pictured, Zeteo’s vice president of research.

To collect the data, researchers placed mannequins with human-like heads in various seats throughout seven models of Boeing and Airbus jets, then made them cough. Or rather, they simulated a human cough, and how aerosolised particles are expelled and disseminated through the air on the plane, McLoughlin said.

Researchers evaluated how factors such as circulation, the exchange rate of cabin air, filtration and forward-facing seats affected the flow of aerosolised particles through the cabin, and who would be most exposed in their proximity to a cougher. Particle sizes and various locations throughout the cabin were considered. Tests were repeated with the dummies wearing disposable surgical masks.

According to Bloomberg, the tests were conducted during 30 hours of flying and a further 24 hours on the ground, and ran from May 5 until last month; data analysis and peer reviews are expected to be completed this month with a final report issued next month.

Twin doctors (and MileagePlus members) Jamil and Idries Abdur-Rahman made their rounds before a recent flight and gave United a clean bill of health. 👨🏾‍⚕️👨🏾‍⚕️✈️

See why they feel safe flying with us. https://t.co/YP5JXQobV2 pic.twitter.com/6N41vf0rfR

‘Throughout the pandemic, our top priority has been the health and safety of our customers and crew,’ Toby Enqvist, United’s chief customer officer, said in an email. Enqvist said he’s encouraged by the early results he’s seen, but did not provide specifics.

Five Reasons to go to the Rugby League World Cup 2021