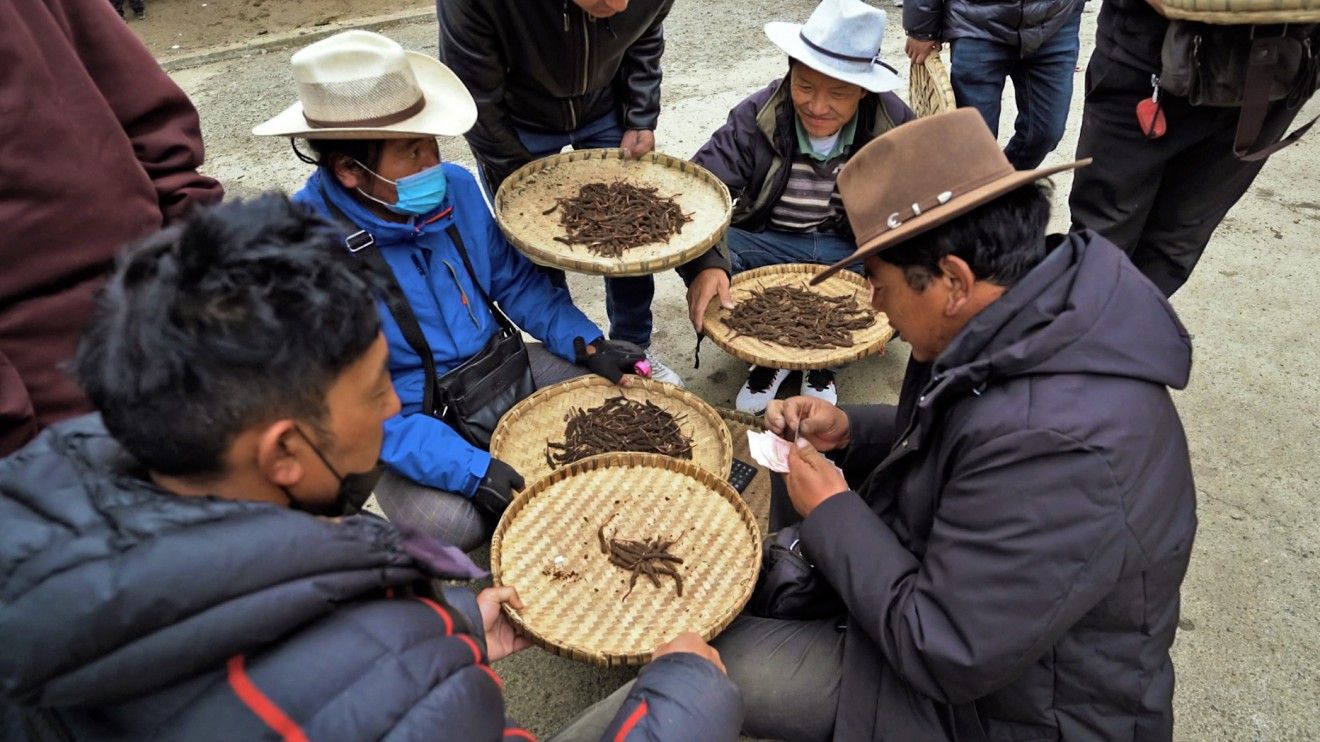 As we draw to the end of the May-June window, so the season for hunting caterpillar fungus high on the Tibetan Plateau and in the Himalayas draws to a conclusion.

The DAIMANI Journal’s commitment to bringing you the most thought-provoking news at the luxury end of the world has taken us to some unusual places, including the foothills of Darjeeling, Mount Everest  and even the outer edges of space.

But even we were brought down to earth by the realisation that caterpillar fungus – one of the most prized ingredients in traditional Chinese medicine – is worth three times its weight in gold.

We are indebted to journalist Jessica Novia for her recent reporting on this fascinating subculture.

She said she had tried to do a story about a Tibetan soap factory in southwestern China, in Sichuan Province, which has strong regional connections with Tibet, being connected along the fabled Silk Road

When she tried arranging a shoot, the factory’s manager told her none of the workers would be around. ‘They’ll be up in the mountains,’ he said.

Why? Because summertime on the Tibetan Plateau is caterpillar fungus-hunting season.

Ma’s secret elixir [which would later be mass-produced and sold as Ma’s Family Army Number One Tonic, a business entity in which he had a 20% stake] helped athletes recover quickly from exhaustion and was made from the blood of freshly decapitated turtles and that very specific fungus which grew on a type of caterpillar found only in the most inaccessible parts of Tibet.

Along with donkey-hide soup, the brew was drunk regularly by the mainly uneducated peasant girls whom Ma took under his wing and subjected to military-type training. He got them to run 65 kilometres a day, six days a week. Cosmetics, long hair and boyfriends were forbidden. Some were required to run behind a motorcycle to which they were attached by a rope.

[Ma’s elixir has since been discredited not least by the publication of a letter from many of the stars who ran as part of Ma’s Army who wrote that large amounts of performance-enhancing drugs were the reason for their world-record-breaking performances.]

Despite the revelation about Ma Junren, in 2017 one pound of premium caterpillar fungus sold for US$ 63,000 at a pharmacy in Beijing [vs the current price of gold per ounce of US$1,770]

Between 2012 and 2017, caterpillar fungus prices rose an average 20% every year. The demand was no longer coming just from China, but primarily now from the USA.

American health brands such as Gwyneth Paltrow’s Goop, see below, have touted it as an immunity-boosting supplement.

The caterpillar fungus trade has become so profitable that thousands of people living on the Tibetan Plateau take months out of their summer to harvest them.

They are mostly found in the Himalayan region, at altitudes above 11,000 feet.

The fungus is the result of a parasitic growth. During the winter, it infects ghost moth caterpillars that live deep in the soil.

Known scientifically as Ophiocordyceps synesis, the fungus takes control of the caterpillar’s brain and forces it to crawl up toward the surface of the soil.

By summertime, the caterpillar dies, while the fungus continues to grow until it pops out of the caterpillar’s head and appears on the surface of the soil.

‘If the caterpillar fungus is pretty long, it’s easy to see the head,’ he says. ‘If it’s small, it’s not so easy, so I just lie there for a minute or two and look very carefully.’

Ni’s day typically starts at 7 am. After a hearty breakfast of tsampa, a Tibetan staple made with roasted barley flour, yak butter, and tea, he heads out to the fields to start looking for caterpillar fungus.

(See below: How the mighty yak has helped Tibetans survive for thousands of years)

He spends over eight hours a day crawling on all fours. It might seem like searching for a needle in a haystack, but he has a few tricks.

‘Usually, we search in places that have been previously dug up,’ he says. ‘There will be fungus there, for sure.’

When he spots one, he carefully digs the soil around it, making sure not to break the fungus. Broken pieces fetch a lot less than whole ones.

Ni’s parents run a stall selling daily provisions to other harvesters. When he’s not searching for caterpillar fungus, he’s helping his parents at their stall.

Caterpillar fungus numbers, though, have been on a steady decline in the past decade. Studies have cited climate change and warmer winters as reasons, since caterpillar fungi thrive in the cold.

Another huge factor is overharvesting. Since caterpillar fungi reproduce by sending out spores, extracting them before their spores can proliferate reduces next year’s numbers.

But it’s unlikely that harvesters like Ni will slow down any time soon. The demand is too high, and the money they can make from collecting caterpillar fungus is too hard to turn down.