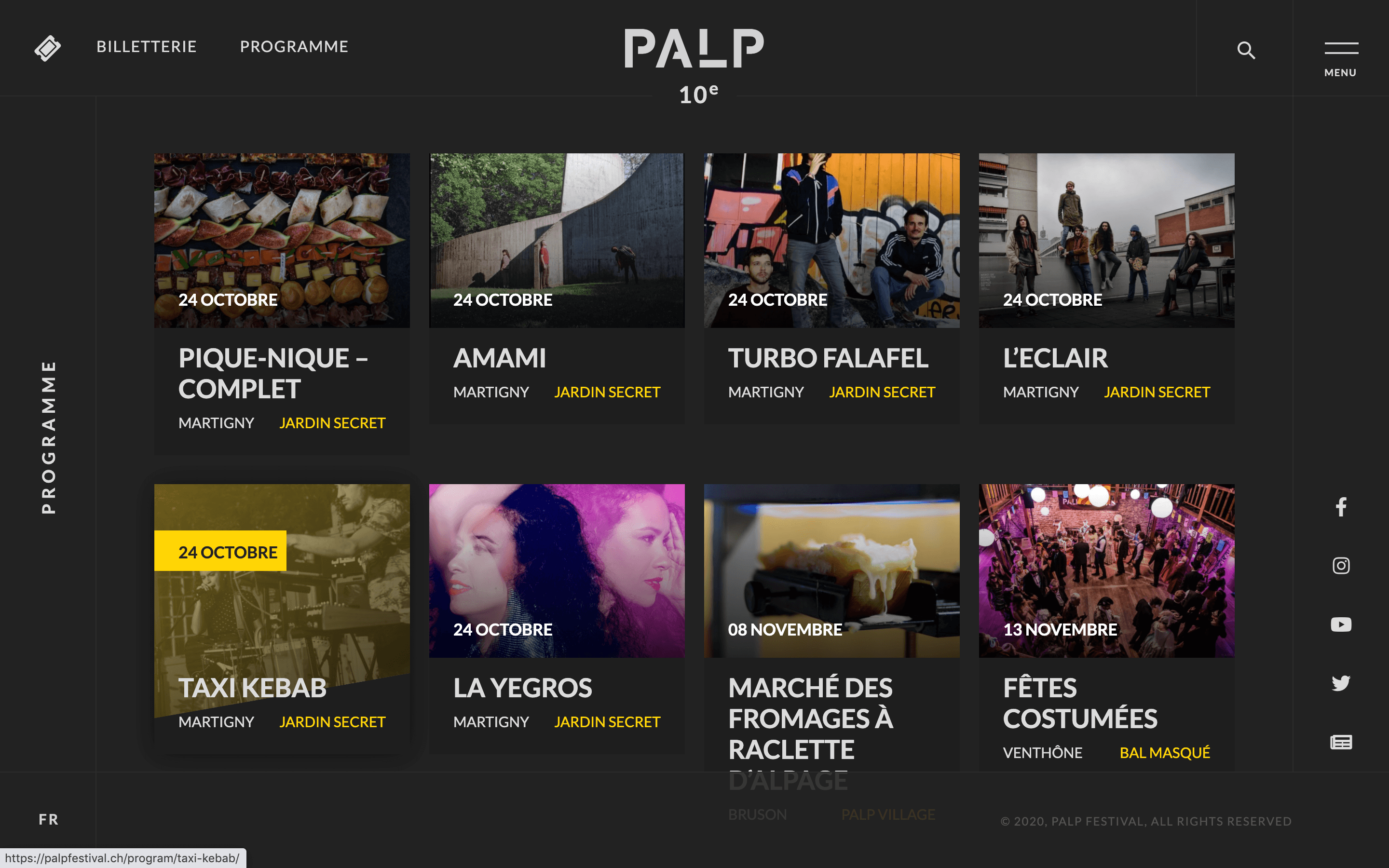 The leading British weekly magazine The Spectator has an excellent Lifestyle section and this recently cast a discerning over a unique Swiss music festival that took place successfully in the midst of the Live Event lockdown.

‘We talked a lot about going the same way as most other festivals and cancelling, but we thought this would be just too sad. If we could do something we needed to try at least’ said Michel May, one of the organisers of the annual Palp festival, a collection of food, culture and music which takes place every year over the Swiss summer.

A big attraction of Palp is one of the festivals within the festival – Rocklette, a combination of rock music and Raclette cheese.

‘We didn’t sleep much in the run up,’ said Michel.

‘US bands started having to cancel straight away and the list of countries which need to quarantine keeps changing, so we’ve been walking a thin line.’

Just a week before the festival started Spain was added to the list and Michel was left with another slot to fill.

Festival-goers were asked to register and enter their contact details, and organisers deliberately scaled down the event this year. To aid the track and trace, tickets were only sold online as well.

‘We limited crowd sizes to 600 and split them into two separate groups of 300, with separate entrances, double the amount of bars and staff, and staff from each side of the divide don’t mix during the festival.’

The Spectator asked how they keep the two groups apart.

‘We use the same fences they have here for the sheep and cattle.’

For London metal band Orange Goblin, the coronavirus has seen them on the bill twice, rather than once. Partly to help limit crowd sizes, partly to help fill the line-up.

‘This was our very first show since December 19 last year’, singer Ben Wade told The Spectator. ‘It’s our 25th anniversary year and we had big plans so seeing everything wiped out by Covid has been hard to take. Even the soundcheck here has been an incredible buzz, just to feel the volume again.

‘It’s been fantastic to see people’s faces in the audience and see them enjoying themselves. It’s been a year of so much uncertainty and confusion regarding live music I think everybody just wanted to let off some steam, I know we certainly did.’

Orange Goblin played two different venues, one just down from the dam, the other higher up in the alpine pass of Col du Lein.

‘The air was a bit thinner up there, but it was a beautiful setting right up in the mountains with lots of mountain bike trails, people hiking, cable cars. It was typically alpine, with cows and goats wearing bells.

‘I think following this year’s experience. it’s a festival that’s going to gain a bit of notoriety across Europe now. The number of people in the industry who have seen the photos, and said “where was that you were playing, I’d love to play there, the setting was so beautiful.”’

Rocklette certainly has a big advantage over other festivals when it comes to staying afloat during the pandemic, namely having the alps as a venue. But I don’t think that was the only key to its success. Also on its side was the ability to adapt and have a different vision of what a festival looks like.

The compromises it made also had some upshots. Limiting crowd numbers and having multiple performances gave fans the chance to have a more intimate musical experience, while the layout of venues made social distancing natural, encouraging people to take a step back and enjoy the music in a different way.

The next chapter of the Palp Festival takes place later this month, with tickets still available here.

Billed as, ‘A tropical creation, an exciting dreamlike visit to a forest within a town, a wild labyrinth in the suburbs: come and kick back in an enormous ephemeral greenhouse in the heart of the Morand distillery, the canton’s most iconic distillery.’

The Spectator concluded their report with a follow-up call to organiser Michel May to see how the rest of the festival had been.

‘It was great, all the events completely sold out. That made for a really good atmosphere. We had people that were partying and going crazy and people who sat back and watched from further away. The venues we’d picked allowed it to work well. We even had the police that came on Saturday to check the protection plan and they said that it was great.’

‘I don’t think things will be back to normal next year but hopefully it will be closer to the way we were living before and I think it will be probably a bit easier to plan because of the experience we’ve gained,’ Michel said.