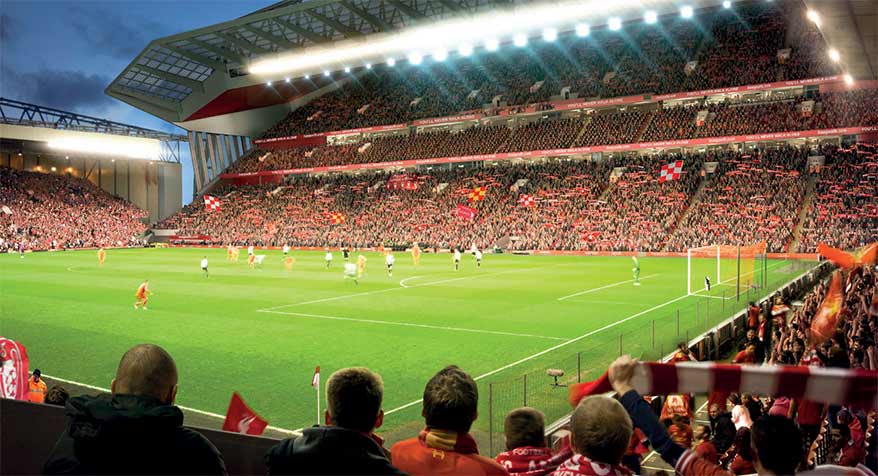 We all have a lot to be thinking about these days, and for Liverpool that’s especially true as the club stands just five points away from their first ever Premier League title.

[After Liverpool drew with Everton in the Merseyside derby on Sunday, and Manchester City's big win over Burnley on Monday then, providing the Reds defeat Crystal Palace tonight, Liverpool could clinch the title as early as tomorrow [Thursday] if City fail to win away to Chelsea.]

But that all of that understandable excitement hasn’t distracted Liverpool’s management from their timeless responsibilities to leave the club in a better situation than when they arrived.

So much kudos from those of us following this issue closely that Liverpool FC announced a global partnership yesterday with Quorn as part of the club’s aim to foster greater food sustainability.

Quorn will work in collaboration with the club to provide new opportunities for supporters to choose from vegetarian and vegan foods on match days, while also working with the club’s nutrition team to extend choice of healthy protein amongst its playing staff. Official VIP Hospitality packages for Liverpool are amongst the most popular products on the DAIMANI sales platform, and these in-venue packages will now feature the Quorn products.

Quorn enjoyed a stunning success when the company partnered with the UK’s largest bakery Gregg’s to launch a vegan ‘sausage roll’ in January last year, a month dubbed ‘Veganuary’ by sustainability campaigners.

By May last year, the vegan sausage roll had been so successful that Gregg’s had had to raise its profit guidance for a third time that year, gave shareholders a special dividend and saw around £700m added to its market value.

Roger Whiteside, Gregg’s chief executive, said: ‘More people are coming [into stores]. Awareness of the brand has never been higher and the vegan roll has helped with publicity and encouraging people to come and have a look at what we’re doing.’

Liverpool’s press release makes the important case that nearly 15% of global greenhouse gas emissions currently come from the livestock supply chain, whereas the environmental impact of the Mycoprotein used in all Quorn products is 90 per cent lower than beef.

But from a purely business perspective the relationship also makes sense: According to the supermarket chain Waitrose, a third of UK consumers say they have deliberately reduced the amount of meat they eat or removed it from their diet entirely. One in eight Britons are now vegetarian or vegan, and a further 21% say they are flexitarian – they have a largely vegetable-based diet, supplemented occasionally with meat.

During the last two seasons, the 'Reds Going Green' initiative has had a significant effect on improving the club’s environmental impact, with positive steps having been made to eliminate the use of single-use plastic and reduce the club’s carbon footprint through sustainable waste management.

In 2018, Reds Going Green won the Liverpool Echo-sponsored Carbon Champion Award. The panel of judges were told that the club had achieved a carbon reduction of 782 tonnes per year (equivalent to the energy produced by 156 homes), significantly reduced the use of plastic in the hospitality areas by over 99 per cent, and had a 98% landfill-free waste programme.

Billy Hogan, managing director and chief commercial officer at Liverpool FC, pictured below, said: ‘As a leading provider of sustainable meat-free products in the UK, Quorn will be a key partner in the club’s sustainability efforts. In this case, Quorn will help us provide our supporters with more sustainable food alternatives on match days.

‘We look forward to providing a platform to help our fans, employees and playing staff make positive contributions to tackling climate change while at the same time considering their health and wellbeing.’

Gill Riley, marketing director at Quorn, said: ‘Our partnership with Liverpool FC is very important to our Quorn vision, which is to provide food that is healthy for our families and the planet. We also want to understand the positive impact Quorn’s super-protein can have on elite sports performers, so working with LFC and its world-renowned nutritional experts will be fundamental in the next phase of our sports science research.’

Five reasons to go to the Investec Derby Festival

Oura: the non-bling titanium ring that may save the NBA season. Or not.