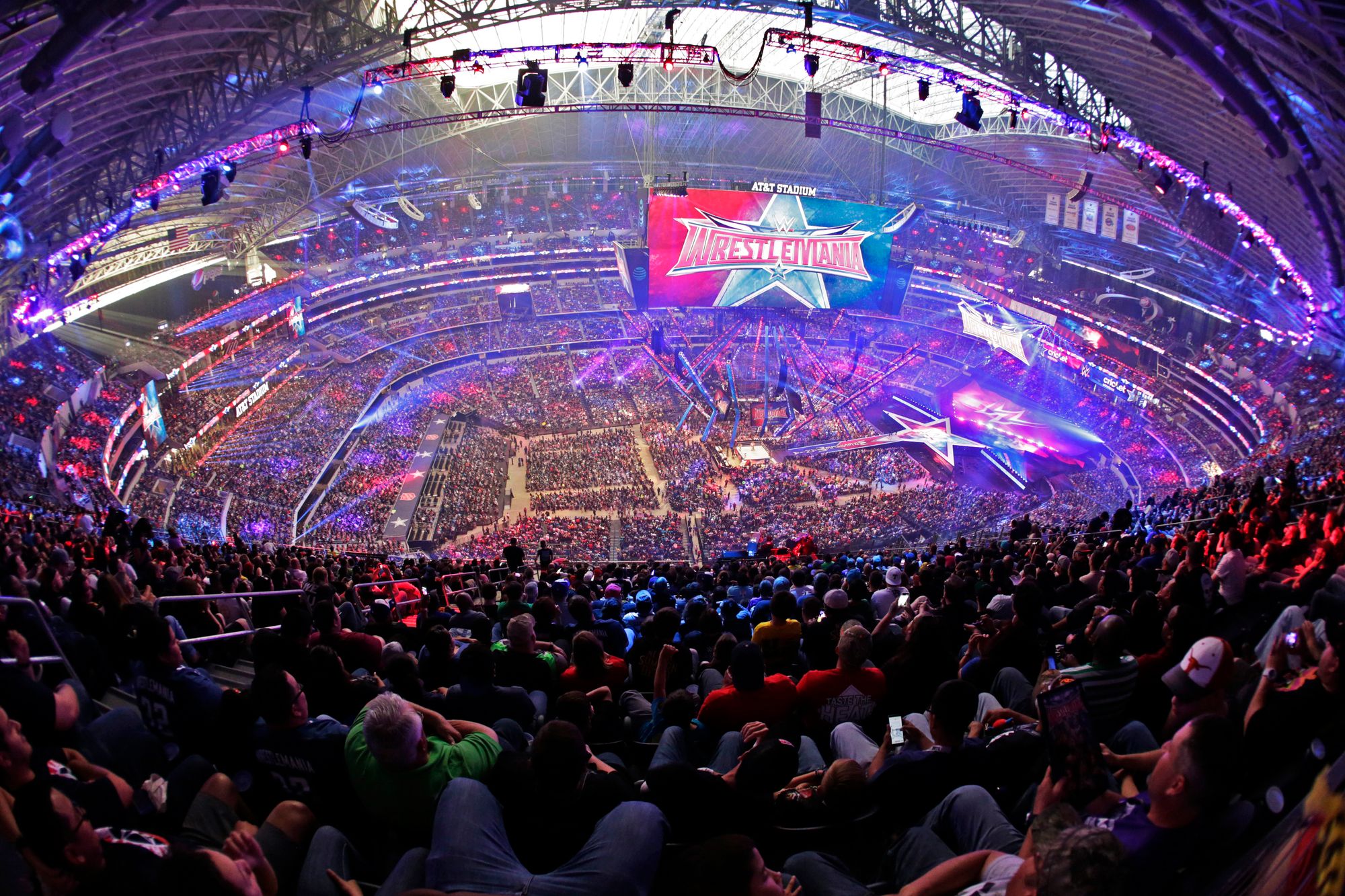 The WWE has had more than five months trying to get used to the new world of fan-less Live Events and finally realised that their temporary, studio-based workarounds were not working. So, starting later this week, WWE is moving this coming Sunday’s SummerSlam and all future events including the next WrestleMania to a purpose-built facility inside the Amway Center in Orlando, Florida.

The facility is being rechristened the WWE Thunderdome.

All WWE’s wrestling cards will be shot in the Amway Center for the foreseeable future, holding Raw, SmackDown, and pay-per-views, and filmed entirely within the building.

‘When people think of WWE, most think of the spectacle that we are, but it was just impossible to put on a spectacle in the Performance Center,’ said Dunn. ‘Moving to Amway, and unveiling the ThunderDome, the opportunities are limitless.’

The new setting will be unveiled this Friday on SmackDown, complete with pyrotechnics, drone cameras, and video boards.

Footage from inside the Amway Center in Orlando, where WWE is working on its newest creation, the ThunderDome pic.twitter.com/WBx8Xx3U8a

‘We can now do things production-wise that we could never otherwise do,’ said Dunn, pictured below. ‘We’re flying drones in the arena, we are putting a roof inside the Amway Center, and we’ll be able to project content onto the roof. So when a big star like Drew McIntyre comes down to the ring, the whole arena will turn into his content with lasers, pyro, smoke, projections on the top of the building and on the floor. It will be a big, beautiful entrance, better than WrestleMania.”

WWE generates almost two-thirds of its revenues from its TV content, including rights fees, the WWE Network, pay-per-view and home entertainment.

Like so much of the Live Event industry, WWE’s television programming has missed the energy provided by a live crowd. So the shows at the Amway Center will feature virtual fans via live video on LED boards.

WWE has partnered with the Famous Group to enhance its in-arena atmosphere, an element that has struggled amidst empty arena shows during the pandemic. Beginning during Raw, people may register for their virtual seat at WWE ThunderDome.

‘Like the NBA, we’re doing virtual fans, but we’re also creating an arena-type atmosphere,’ said Dunn. ‘We won’t have a flat board, we’ll have rows and rows and rows of fans. We’ll have almost 1,000 LED boards, and it will recreate the arena experience you’re used to seeing with WWE. The atmosphere will be night and day from the Performance Center. This is going to let us have a WrestleMania-level production value, and that’s what our audience expects from us. We are also going to put arena audio into the broadcast, similar to baseball, but our audio will be mixed with the virtual fans. So when fans start chants, we’ll hear them.

‘We start [this] Friday on SmackDown, and it will be a learning experience. We have two days of testing, and we’re going to practice like hell, then we’re off to the races. We may have fans for certain entrances, standing up and cheering for the typical babyfaces. But someone like Bray Wyatt, who is so character-driven, the entire Amway Arena will be one big Fiend-dom. That’s our opportunity to be different from sports, where we can present these larger-than-life characters uniquely. This will be great for people watching at home across the globe, as well as the ones participating.”

The venue will be a closed set, and Dunn confirmed that WWE will continue to mandate regular coronavirus testing, social distancing, and wearing a mask when off-camera.

There is still no plan in place to bring fans into the venue, which is why Dunn stated there is the potential to remain at the Amway through the end of the year.

‘It’s open-ended,’ said Dunn. ‘Obviously, we want to get back in the live event business. We rely so much on our fans. The Amway people have been fantastic to work with, and we look forward to staying as long as it takes.’

After 38 years of television work in WWE, this is an entirely new experience for Dunn and his production team.

‘If you asked me a year ago, I’d have said we’ve done everything,’ said Dunn. ‘But this is going to be an interactive experience, and it’s something like I’ve never produced before. Producing the show is the best part of my job, and this is going to be a historic challenge for our team to pull off. We’re excited to pull it off.’

Strikingly similar to pro sports, WWE’s shows have not been the same without crowds. Dunn is optimistic that the ThunderDome experience will add a significant, consistent jolt of electricity to the WWE product.

‘We’re grateful and so appreciate the fans are hanging with us,’ said Dunn. ‘It’s been tough. The shows haven’t been what we’d like them to be, and we’d be dishonest saying anything else. We miss our fans. Our fans make our shows. Without them, it’s been really challenging. I can’t wait to see the ThunderDome full of 1,000 people, giving us the energy we need to make this as entertaining as possible. I think people watching and participating are really going to enjoy this, and it’s going to make people say, “Wow, WWE, it’s back.”’