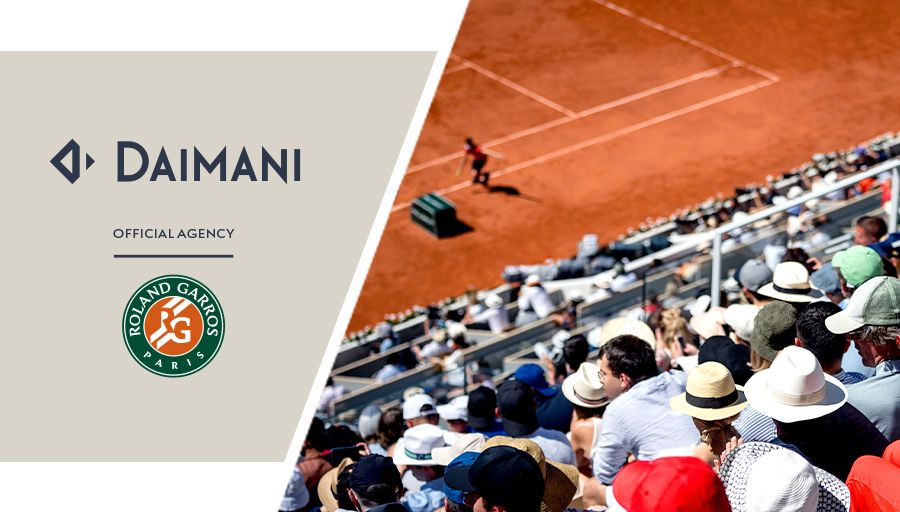 As our industry’s first digital e-commerce platform for official VIP Hospitality, all of us at DAIMANI know that we are immensely blessed to work with some of the best-known and most prestigious sports events in the world.

But the news, confirmed today by the French Tennis Federation, that DAIMANI will be one of a select few official hospitality agents for next year’s Roland-Garros brought an unusual amount of happiness within our company.

Making the announcement on behalf of DAIMANI was our company vice-chairman Pascal Portes, a former French professional tennis player who competed at Roland-Garros in the early 1980s: ‘We are grateful for the trust that has been placed in us by the French Tennis Federation. Our team is delighted to assist the event reach a wider, international clientele thanks to our state-of-the art e-commerce platform and digital sales solution.

‘With Roland-Garros’ recent refurbishment and extension, including additional courts and a retractable roof over the Centre Court, the 2022 tournament is perfectly placed for international visitors. We are delighted to be invited to become part of this great French success story,’ said Portes, whose highest ATP ranking was 41 achieved in May 1985 when he battled regularly with the likes of Bjorn Borg and John McEnroe.

Portes’ relationship with both the FFT and Roland-Garros would prove life-changing. He received a tennis scholarship that saw him move from the south of France, where he was born, to Paris. He boarded within Roland-Garros as a youngster while building up his playing skills alongside Davis Cup tennis compatriots that included Yannick Noah, Henri Leconte and Guy Forget.

@rolandgarros I paid €420 for premier hospitality tickets. The hospitality zone isn’t even in Roland Garros. It’s in Stade de France, 20 minutes walk from my court. So disappointed. pic.twitter.com/iCjmOXdu27

Always buy official – as this gentleman found out to his cost.

DAIMANI is one of the FFT’s select Official Hospitality Agencies for Roland-Garros 2022, scheduled to take place between May 16 and June 5 next year. Under the agreement, DAIMANI will have full sales and marketing rights internationally excluding European Union territories and the UK.

Over 600,000 spectators are expected at next year’s event and Roland-Garros was responsible for €255m out of €325m total FFT revenues in 2019, according to an Agence France-Presse report. Of this €255m figure, just over one-third came from selling tickets and having corporate hospitality on-site.

DAIMANI’s VIP hospitality provision will be at the historic L’Orangerie building located just 100 metres from the Philippe Chatrier court. On the first floor of L’Orangerie, you'll find the brightly lit Mezzanine, which can accommodate up to 120 people for a cocktail format lunch or dinner. The official catering partner is Paris Society whose offer includes unlimited refreshments and a premium service throughout the day.

As part of DAIMANI’s appointment, we have also been authorised to build out a sales agent network through the appointment of sub-agents, said Portes: ‘primarily in North America but also in the Middle East, Asia and Oceania, so if you are in the business and interested in becoming a sub agent please do get in touch to start the appointment process,’ said Portes.

An abundance of seasonal fun, traditional festive characters all at one of Britain’s most prestigious long-distance hurdle races!