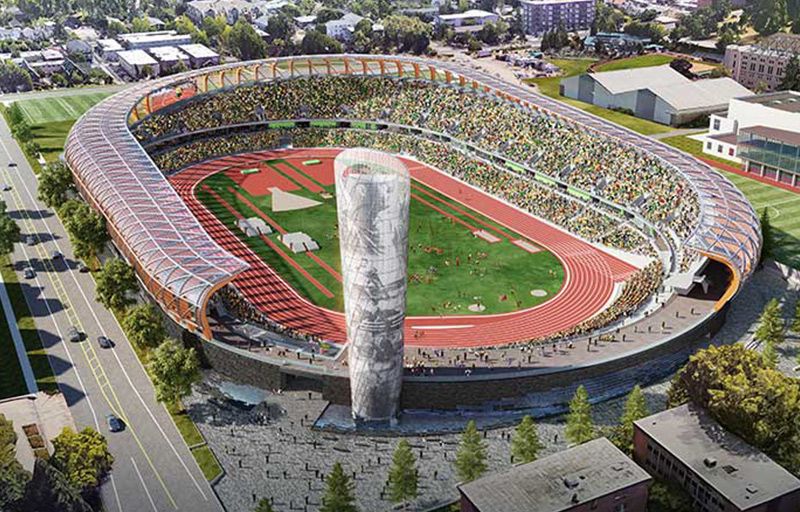 The newly renovated Hayward Field track and field stadium which lies at the literal heart of the University of the Oregon, and the figurative heart of the athletic shoe company Nike, is quite something to behold.

And that’s been recognised by the prestigious Architect’s Newspaper which has announced that the venue for next year’s World Athletics Championships Oregon 2022 was their pick as winner of 2021’s Commercial – Sports & Stadium Best of Design Award.

And if you want to see the venue for yourself – doing what it does best, hosting athletics - then look no further than DAIMANI who are delighted to be the exclusive rightsholder of Oregon 2022’s official hospitality programme. Packages for all ten evening sessions can be purchased on our digital platform, here, with a unique seat-view feature which allows you to see the stadium from the block you will be sitting.

The reported USD228m that the project cost was raised from private donations but mostly from the billionaire cofounder of Nike Phil Knight and related Knight-family charities.

But Knight had grown so frustrated with the politicking over the original design concept that, in the words of the local newspaper, ‘in May 2017, Knight pushed back from the table, threw up his hands and said, “I’m out.”’

Thankfully a month later Night was back, with his support pledged to a reworked concept that was still controversial but eventually won over all doubters.

Knight’s connection to Hayward Field dates back to 1957 and his first collegiate race as a miler on the Oregon track team. The Seattle Times predicted a a one-point for the visiting Washington track and field teamvictory, while Eugene’s Register-Guard projected a one-point win for the Knight’s Ducks.

‘Neither paper had Phil Knight placing in the mile,’ he said. ‘I figured if I could get a point, I could win the meet for my school.’

As the runners made their final pass in front of the famous East Grandstand, Oregon’s Jim Grelle surged into the lead. Knight followed close behind, drawing a roar from the crowd as Oregon runners finished 1-2-3. The Ducks went on to win the meet, and Knight felt like a hero.

The original Hayward Field opened in 1919 as a football stadium built on what was previously a cow pasture. From that inauspicious beginning was born a venue that hosted multiple NCAA championships and Olympic trials over the years including for qualification to the Tokyo 2020 Games.

The theatre for track...is real.

The renovations were completed last summer, but Covid restrictions have meant that the maximum number of fans that the venue can host has not yet been achieved.

As well as increasing the number of tracks from eight lanes to nine, the main focus of the new design was to create a 'theatre-like' experience for spectators, with unobstructed sight lines throughout the venue and improved acoustics.

One feature that no doubt impressed the Architect’s Newspaper is that the stadium's roof is held up by support beams made from wood from Oregon's local forests. Wood is a central theme to the renovations, representing a prominent part of the state's identity.

Is China's Live-Event business on the edge of a stadium-led gold rush?