Five Reasons to go to the 2021 Tennis Classic at Hurlingham 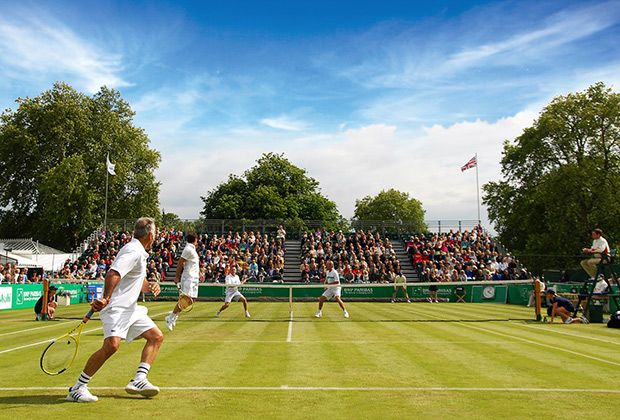 The Live Event lockdown has been tough for all us. But we take seriously our obligation to remind people how great the world is out there, specifically that magical biochemistry that happens within all of us when we meet and celebrate at Live Events.

So as the lockdown begins to ease, this is Welcome to the Fightback, an introduction to an event that are we are live-selling on the DAIMANI platform.

The Tennis Classic at Hurlingham 2021

1. The Most Exclusive Club in the World?

The venue for the Tennis Classic has been described as the most exclusive club in the world – a private members club with a long waiting list at the heart of one of the world’s great cities. The only way that an individual can gain membership into the club is to be recommended and then seconded by at least two currently full-time members at Hurlingham. The waiting list for membership is, let us say politely, rather long. The only exceptions made for additional members are children of current members, who receive preferential treatment over others. It’s believed that Hurlingham has over 10,000 members, and that new members are likely to have wait over 15 years to be accepted.

2. The best players in a unique setting

With the 2021 edition of Wimbledon scheduled to start on June 28 – only three days after the conclusion of the Tennis Classic – the Hurlingham-hosted event is a perfect tune-up for major names wanting to get their grass-court game in order. And that has been one of the enduring successes of the Tennis Classic: being able to provide an intimate and bucolic setting for tennis fans to engage with the ATP’s best players while they prepare for the greatest Grand Slam of them all.

The Hurlingham Club has always enjoyed serious Royal connections. The club itself was founded in 1867 as 'as an agreeable country resort' located in Fulham and bounded on one side by the River Thames. The pigeon that forms part of the club's crest is a tribute to the many keen shots who were early members. These included King Edward VII [1841 – 1910] who was an early patron in his time as Prince of Wales; his presence ensured the club's status and notability from the beginning. The current patron is Prince Philip, Duke of Edinburgh.

4. There’s only one Mansour Bahrami

The Iranian-born Bahrami remains one of the most popular figures at any tennis event and he’s made the Tennis Classic at Hurlingham something of a home-away-from his normal French residence. Bahrami’s playing career is tinged with the tragedy of ‘what might have been’. He was in the Iranian Davis Cup team at the age of sixteen but the 1979 Iranian Revolution looked to have ended his tennis career in one stroke; he spent the next three years playing backgammon. In the late 1980s – having lost as much as 15 years of his potential career - he was able to burst back onto the scene and enjoy a successful doubles career. His career highlight was reaching the French Open doubles final in 1989 with Eric Winogradsky. Bahrami has famously never had a tennis lesson and has even used a frying pan to teach himself.

5. Tennis and sports in general are the heart of the Hurlingham Club

As well as the annual Tennis Classic at Hurlingham, the club is synonymous with sport including polo, whose rules were first published at the club in 1873, and croquet. The Hurlingham Club was the home of world croquet from 1959 to 2002. In addition there is a nine-hole, par-3 golf course which is open in winter months and, as well as tennis, cricket, bowls, skittles, squash and swimming (with both indoor and outdoor pools) as well as fitness facilities and a gymnasium. Indoor pursuits such as bridge, backgammon and chess are also played to a fiercely competitive level!