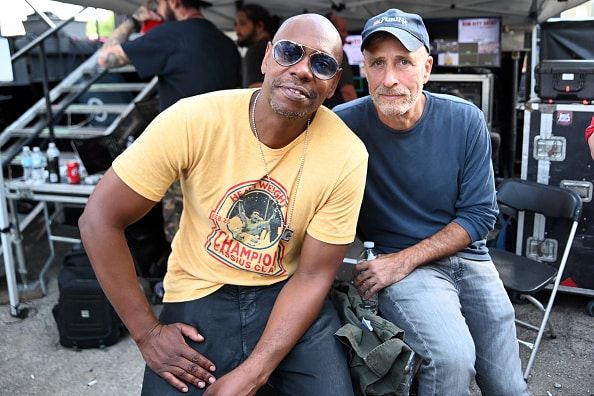 In the new comedy-industrial complex, there can have been few more influential figures than Dave Chappelle. And as we hunt for a meaningful format for Live Events in the post-coronavirus world, Chappelle may also be showing us the way forward thanks to the unique dynamic that is accepted by anyone attending mainstream comedy clubs these days.

Chappelle’s home town is Yellow Springs in Ohio, a village that takes its name from a nearby natural spring that is rich in iron ore, leaving a yellowish-orange colouring on many the local rocks.

And it has been Chappelle’s practice to try out many of his new routines in the iconic Wiley’s Comedy Club in nearby Dayton. Because this is ‘new’ material, Chappelle and his management are ultra-strict about customers bringing in cellphones. Ultra-strict. Especially when the value of a Netflix Chappelle special can be measured in the tens of millions of dollars.

Please leave your phones in your cars or at home. Anyone who brings a cell phone will be required to place it in a locked pouch. Everyone is subject to a pat down and wanding. Anyone caught with a cell phone inside the venue will be immediately ejected.

So in and around Yellow Springs and Dayton, Chappelle can count on a loyal base of customers who understand the trade-offs required if they’re to be the very first people to enjoy Chappelle’s new material.

[To add to the community’s loyalty, Chappelle has been a favourite of many Ohioans for his continued support for the state as a whole; twelve months ago he held a fundraiser for victims of a mass shooting in our Oregon District.]

In June Chappelle released a 27-minute special 8:46 direct to YouTube, following the killing of George Floyd, that was filmed in Ohio in which the careful application of social distancing measures can be clearly seen. Chappelle’s Netflix special 8:46 was filmed on June 6 and post-produced and transmitted in just six days. The title of the set, 8:46, is a reference to the amount of time Minneapolis police officer Derek Chauvin kept his knee on George Floyd’s neck, which led to Floyd’s killing. 8:46 was already a significant number to Chappelle, since it was the time in the morning that he was born. The video points out that before this set, Chappelle hadn’t performed live onstage in 87 days.

So that brings us to Dave Chappelle and Friends: An Intimate And Socially Distanced Affair, a concert format that has been running through much of last month and has two dates remaining this week at the Wirrig Pavilion in Yellow Springs.

The online bloggers at Pajiba reported one concert attendee saying, ‘the impressive thing about it was how well-structured and implemented the COVID procedures were. Dave is known for being strict about cell phones and the same discipline was used with making sure everyone left with the same health that they came in with.’

‘And even more impressive than that? How incredibly cheerful and welcoming the staff was. I mean, from the greeter at the gravel road to that took you to the parking lot all the way to your chairs, the main priorities of the staff were to make sure that I was safe and having a great time.’

Only holders of official VIP tickets could access alcohol which, as one reviewer said, meant ‘no unruly idiots coughing in your face or making the experience blow for you, which is also amazing.’

Like the polished professional that he is, Chappelle will now take much of this new-but-now-polished material on the road where he has a slate of concerts later this month and next month including with stand-up comedian, UFC commentator and podcast legend Joe Rogan.

David Letterman was one of the cavalcade of stars attending Yellow Springs, Ohio, leading to speculation that Dave Chappelle will be an upcoming guest on Netflix’s Letterman chatshow