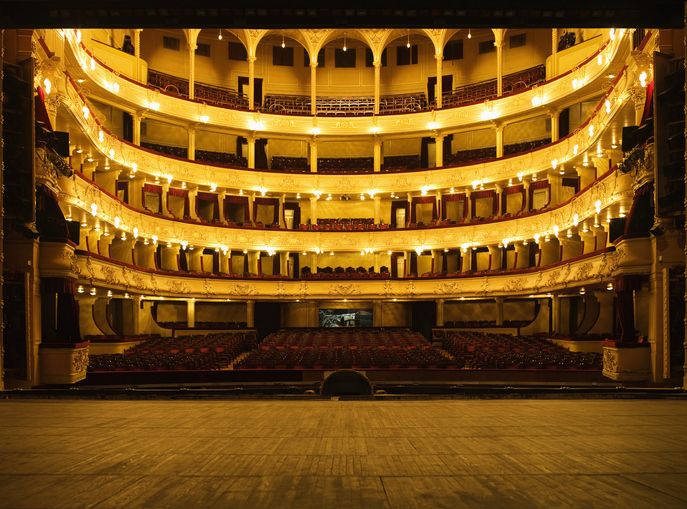 The DAIMANI Journal is happy to map out sixteen of some of the best online theatre experiences you might hope to enjoy this weekend, from the very high-brow Shakespeare and Beckett to the self-explanatory ‘My Left Nut’ and a play on the 2013 reality star known as ‘Mushy’.

We’ve taken in a broad sweep of the best from across Europe, from Ireland to Belarus, Sweden, Germany, France and Belgium, and a fair bit from the UK, and sincerely hope you enjoy.

The National Theatre has unveiled a powerful lineup of some of its greatest hits, with each new cycle streaming online on Thursdays at 7pm and then available for seven days. Its production of the political comedy This House by James Graham is available until 4 June. The Donmar Warehouse’s 2013 staging of Coriolanus, starring Tom Hiddleston in the title role and directed by Josie Rourke, is then online until 11 June.

Lauren Cuthbertson stars as cellist Jacqueline du Pré alongside Matthew Ball as her conductor and – audaciously – Marcelino Sambé as her instrument. This was ballet choreographer Cathy Marston’s first main-stage commission for the Royal Ballet and premiered in February, with a live broadcast also to cinemas from Covent Garden. The Royal Opera House is streaming that recording for free on YouTube and Facebook on 29 May – this is one of the most enticing of their Our House to Your House series.

The Tempest, with Simon Russell Beale as Prospero, is the first item on the menu, accessible with a subscription (or 14-day free trial) via the online service Marquee TV.  This is followed by Antony and Cleopatra with Josette Simon, then Richard II with David Tennant. Over on the BBC iPlayer you can see six RSC productions: Hamlet starring Paapa Essiedu, Macbeth with Christopher Eccleston, Much Ado About Nothing with Edward Bennett and Michelle Terry, Othello with Hugh Quarshie and Lucian Msamati, Romeo and Juliet with Bally Gill and Karen Fishwick, and The Merchant of Venice with Makram J Khoury.

Ireland’s national theatre, The Abbey, has brought together 50 actors and 50 writers for this series of rapid-response monologues about coronavirus, all self-taped by the performers themselves in their isolation.  The writers include Frank McGuinness, Iseult Golden, Stacey Gregg, Sarah Hanly, Nancy Harris, Enda Walsh and David Ireland; actors includes Nicola Coughlan, Caoilfhionn Dunne, Denise Gough, Bríd Ní Neachtain and Brendan Gleeson.

The Berlin powerhouse, run by Thomas Ostermeier, is streaming a number of their archived productions, many with English subtitles, and often for one night only. It’s a rare opportunity for UK audiences to see works directed by Luc Bondy, Peter Falk and Ostermeier himself. This month’s lineup can be viewed here.

Five works by the Swedish choreographer are on Marquee TV, including a new work for the Royal Swedish Ballet, Eskapist, which has won rave reviews. One reviewer said of the vast staging, ‘Ekman offers a bombardment of fantastical images, realised with the help of Danish fashion designer Henrik Vibskov, who does a Mad Hatter’s couture party of eccentrically structured silhouettes.’ Ekman’s other works to rent include Swan Lake and Midsummer Night’s Dream.

What The Butler Saw

This was Joe Orton’s last farce, completed in the summer of 1967 just before he died. The play is a subversive satire about an irrational world, set in a psychiatrist’s consulting room. Rufus Hound is in the white coat as the philandering Dr Prentice in Nikolai Foster’s 2017 production for Leicester Curve and Theatre Royal Bath.  The cast includes Dakota Blue Richards and Jasper Britton.

If you’ve watched both TV series, or read the scripts, then you will know what the excitement is about. The stage show at the Wyndham theatre in London sold out last summer but Fleabag is available to stream on Soho theatre’s On Demand site  and on Amazon Prime. All proceeds will go towards charities including the National Emergencies Trust, NHS Charities Together and Acting for Others, the charity for theatre workers in times of need.

Musharaf Asghar became 2013’s most unlikely reality TV star when the stuttering teenage schoolboy appeared on Educating Yorkshire, which documented how a teacher helped him with his lifelong speech impediment. Asghar’s tale is now the subject of a new British musical, co-produced by Rifco theatre company and Watford Palace theatre and staged last year. It’s online and free to view for the entire isolation period.

The internet has been vital to the Belarus Free Theatre which is forced to operate online and underground after the government banned it on political grounds. They have long rehearsed and created new productions over Skype. Now, the company – which turns 15 this year – is streaming archive shows throughout May and June. English subtitles are available for those productions in Russian and Belarusian; each show will be available online for 24 hours. A cast of actors including Samuel West and Stephen Fry will also be reading excerpts from their favourite fairytales in BFT’s new online series.

The current lockdown seems Heaven-sent for a playwright famous for exploring isolation, uncertainty and endurance. In this production, filmed at the Bouffes du Nord in Paris in 2015, Peter Brook directs five Beckett shorts with a cast of three (Jos Houben, Marcello Magni and Kathryn Hunter).  The production comprises Rough for Theatre I, Rockaby, Neither, Come and Go and Act Without Words II.

At first sight they could be the German Pina Bausch’s dancers: a procession of performers wearing smart suits and enigmatic smiles, gliding across a stage filled with apples. While Bausch’s company memorably balanced apples on their heads in Palermo Palermo, Smashed is created by those juggling supremos Gandini, so the fruit is mostly in motion here. Their Bausch homage has the same childlike games, adult fantasy and bruised humour of the German choreographer’s work. ‘Smashed is crisp, fresh and full of flavour’ says the Guardian. ‘You may never look at an apple in the same way again …’

The brilliant Belgian dance-theatre company celebrated turning 20 years old this year but remain best known for their performances at London international mime festival and their trilogy comprising Mother, Father and Child. Their brand of domestic terror, hope and ennui will strike a chord at this troubling time. Watch their first trilogy (Le Jardin, Le Salon and Le Sous Sol) online.

The School for Wives

The beauty of online is that travel restrictions can’t stop you from enjoying international theatre online. Paris’s esteemed Odéon has released its 2018 production of Molière’s satirical 1662 comedy of manners and cuckoldry.  Claude Duparfait stars as the foolish Arnolphe, under Stéphane Braunschweig’s direction. English subtitles available, naturellement.

Although this is presented to you in the form of a TV series and not a theatre experience, BBC Three’s comedy drama is based on one of the funniest and best-known recent fringe theatre shows.  It’s based on Michael Patrick’s own teenage experience of a medical condition that left his testicle ‘so big you could play it like a bongo’.

Love dance? Need to exercise at home? Then join the queen of Belgian avant-garde performance Anne Teresa De Keersmaeker as she talks you through how to perform her 1983 classic, Rosas Danst Rosas.  All you need is a chair, a bit of legroom and enough space to swing your hair.

The big birthdays in our business that fall this week

Happy Sagarmatha Day! Fancy a VVIP trip to the top of Mt Everest?