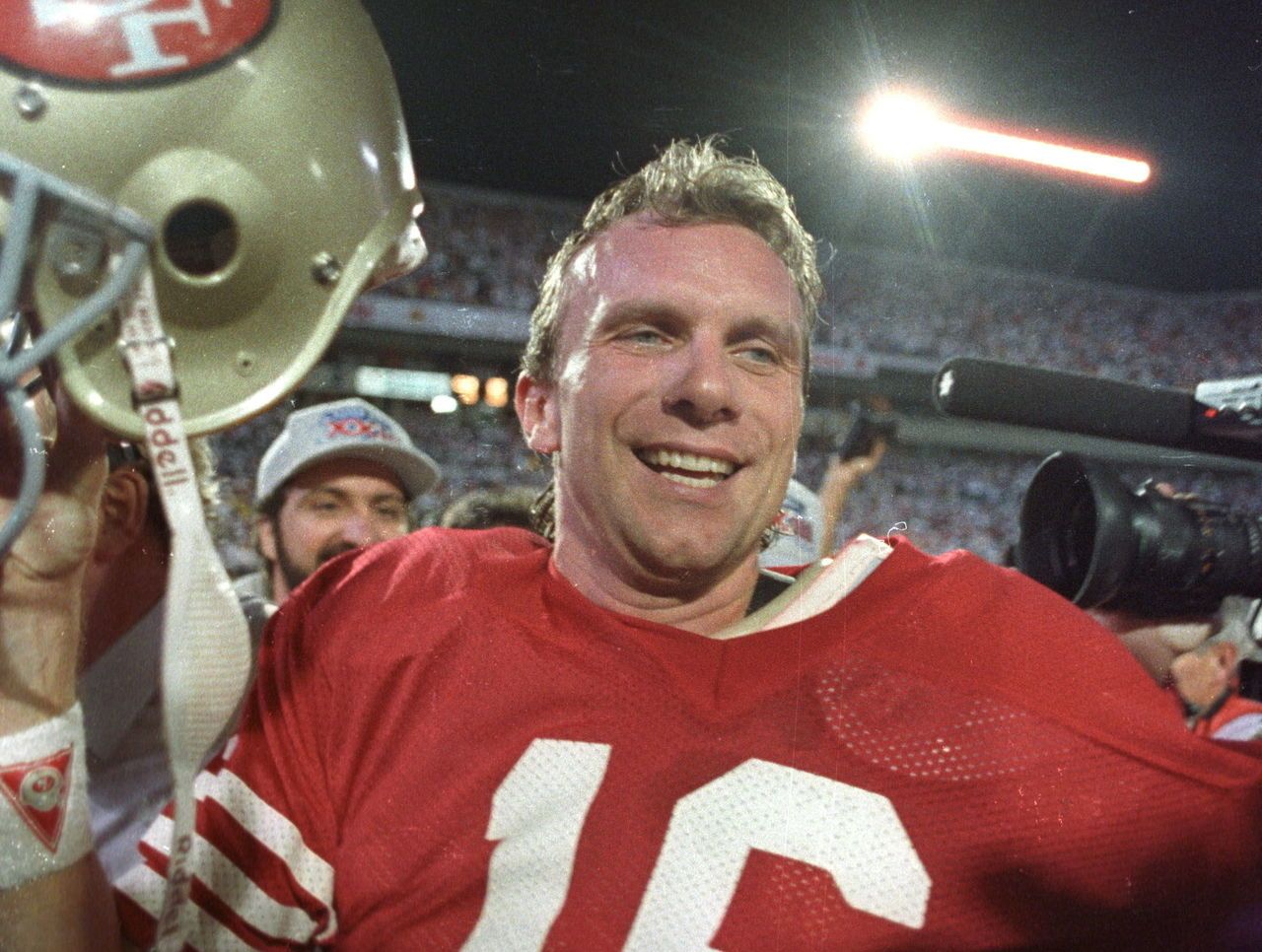 Welcome to the Fightback

The official rightsholder of the VIP Hospitality programme for Super Bowl LV has unveiled their star attraction for their pre-game experiences and, for those of a certain generation, there isn’t a bigger name in NFL: Joe Montana, aka the Comeback Kid and Joe Cool.

Montana is a four-time Super Bowl champion and three-time Super Bowl MVP and will be joining On Location Experiences – the Official Hospitality Partner of the NFL -- at its pregame parties in Tampa, Florida, on February 7, 2021.

An OLE press release says that Montana will appear at each of the OLE pregame experiences and ‘will talk about his incredible playing career, past Super Bowls, the current Super Bowl matchup, his life and so much more’.

In addition, if you purchase an official VIP Hospitality package between now and September 1, you will be invited to an exclusive virtual meet & greet with Montana. Feel free to contact me at DAIMANI directly if you would like to discuss the range of official ticket plus hospitality products on offer: charlie.charters@daimani.com

If you need more than just hearing that name *Joe Montana* to convince you to purchase official VIP Hospitality for the Super Bowl, then do please enjoy these five cool facts that were published by CBS Sports just prior to the legendary quarterback’s 64th birthday two months ago.

2. A member of Western Pennsylvania's ‘Cradle of Quarterbacks’

Western Pennsylvania has produced some of the greatest quarterbacks in league history, a list that includes Montana, Johnny Unitas, Joe Namath, Jim Kelly and Dan Marino. A native of Monongahela, Pennsylvania (which is about 25 miles south of Pittsburgh), Montana, a two-year starter in high school, was tabbed as a Parade All-American as a senior. Despite receiving a slew of basketball scholarships, Montana chose instead to play quarterback at Notre Dame. A member of the school's 1977 national championship team, Montana offered a foreshadowing of what was to come in the NFL during his final college game. In the 1979 Cotton Bowl, Montana, who played despite suffering from hypothermia, led the Irish to 23 unanswered points in the fourth quarter to lead Notre Dame to a 35-34 win.

4️⃣0️⃣ years ago at the @CottonBowlGame, @NDFootball QB Joe Montana suffered from hypothermia before a miracle comeback.

Saturday, the Irish head to the Cotton Bowl once more when they battle Clemson. Look back at the legendary Chicken Soup Game.#GoIrish pic.twitter.com/9HX1un8syT

Six years later, Montana faced off against fellow Western Pennsylvania native Dan Marino in Super Bowl XIX. Marino, the league's reigning league MVP, got off to a hot start, throwing an early touchdown pass while giving the Dolphins an early lead. Undeterred, Montana and the 49ers responded with gusto, with Montana leading the 49ers to three second-quarter scoring drives to give San Francisco a 28-16 halftime lead. Montana, who threw for a then Super Bowl record 333 yards (while also rushing for 59 yards, a then Super Bowl record for a quarterback), sealed the win -- and his second Super Bowl MVP award -- with this fourth-quarter touchdown pass to Roger Craig. Montana and Marino would combine to throw for 651 yards, a Super Bowl record at the time.

2. An early inspiration for Brady

Tom Brady, the man who many believe has surpassed Montana as the greatest quarterback of all-time, was a huge fan of Montana as a child growing up in San Mateo, California. In fact, a 4-year-old Brady was inside Candlestick Park on Jan. 10, 1982, when Montana found Dwight Clark in the back of the end zone that gave the 49ers a 28-27 win over the Cowboys in the NFC Championship Game. The play, forever remembered as ‘The Catch,’ propelled the 49ers to their first Super Bowl win, a 26-21 victory over the Bengals two weeks later in Detroit's Silverdome.

‘I was lucky to grow up in the Bay Area at that time,’ Brady recently said when looking back on his time as a 49ers fan. "I will always remember being at all the Super Bowl rallies, and my mom taking me out of school and banging pots and pans on the El Camino after they would win Super Bowls. Those memories never go away."

On Feb. 5, 2017, Brady surpassed Montana by winning his fifth Super Bowl win as the Patriots' starting quarterback. Fittingly, Brady pulled off a Montana-like comeback to get the win, as New England overcame a 28-3 deficit to defeat the Falcons in overtime, 34-28. Three years later, Brady, who is now the proud owner of six Super Bowl rings and four Super Bowl MVP trophies, was standing beside his NFL hero as members of the NFL's 100th anniversary team.

In four Super Bowl games (and 122 pass attempts), Montana never threw an interception in the big game. In Super Bowl competition, Montana completed 68% of his passes for 1,142 yards with 11 touchdowns and zero interceptions. While his numbers in Super Bowl XVI were nothing to write home about (he threw for 157 yards, nearly half of what his counterpart, Cincinnati's Ken Anderson, delivered in a losing effort), Montana's last three Super Bowls were a thing of art.

Four years after defeating Marino's Dolphins in Super Bowl XIX, Montana threw for a then Super Bowl record 357 yards in a rematch against the Bengals. Trailing 16-13 with just over three minutes remaining, Montana led the 49ers on a game-winning, 92-yard drive that culminated in his 10-yard touchdown pass to John Taylor. Ironically, this is the one Super Bowl when Montana didn't win MVP; the award instead went to Jerry Rice, whose 215 receiving yards that day remains a Super Bowl record. Montana would ultimately pick up his third MVP a year later, after he threw a then-record five touchdown passes in San Francisco's demolition of the Broncos. In fact, the 49ers' 55 points scored in the game, as well as their 45-point margin of victory, remain Super Bowl records.

Montana did come close to throwing a Super Bowl interception. Trailing 13-6 at the start of the fourth quarter of Super Bowl XXIII, Bengals cornerback Lewis Billups dropped what would have been an interception off Montana in his own end zone. Montana, as he often did, made the most of his second opportunity, hitting Rice for the game-tying touchdown pass two plays later.

As the 49ers' quarterback, Montana won nearly three times as many playoff games (14) as he lost (five). Along with his 4-0 record in Super Bowls, Montana posted a 2-0 playoff record against Mike Ditka's Bears, defeating Chicago in the 1984 and '88 NFC title games. His 288-yard, three-touchdown performance against the Bears in the '88 title game, played in sub-freezing conditions inside Chicago's Soldier Field, is one of the more underrated performances of Montana's career.

If there was an NFC team that seemed to give Montana and the 49ers fits, it was the New York Giants, led by head coach Bill Parcells, defensive coordinator Bill Belichick and an aggressive defence that featured Hall of Famers Lawrence Taylor and Harry Carson along with Pro-Bowlers Carl Banks, Leonard Marshall and Jim Burt. After defeating the Giants in the '81 and '84 postseasons, Montana and the 49ers were bludgeoned by the Giants in the '85 and '86 postseasons, as San Francisco was outscored in those games by a combined score of 66-6. In their '86 loss to the Giants, Montana was knocked out of the game by Burt, as New York ran away with the game, 49-3, en route to winning franchise's first Lombardi Trophy.

The hits appeared to be taking a toll on Montana, who missed 10 games due to injury during the '86 and '87 seasons. Against the Vikings in the second round of the '87 playoffs, Montana was benched in favour of Steve Young, who was acquired via a trade with the Buccaneers the previous offseason. Young's success against the Vikings (albeit in a losing effort) ignited a quarterback controversy that wouldn't be settled until head coach Bill Walsh chose to stick with Montana after watching Young and the 49ers blow a 23-0 lead to the Cardinals in Week 10 of the '88 season. With Montana back, Walsh's team would lose only more more game that season, as the 49ers would go on to defeat the Bengals in Super Bowl XXIII, Walsh's final game as San Francisco's head coach.

With Young playing on occasion, Montana was the team's unquestioned starter during the '89 and '90 seasons. Playing some of the best football of his career, Montana led San Francisco to another Super Bowl win in '89 before guiding San Francisco to within a game of its third consecutive Super Bowl appearance in 1990. But against the Giants in the NFC title game, Montana was knocked out of the game by Marshall with the 49ers holding a slim lead. With Montana out, San Francisco committed a costly turnover that led to the Giants kicking the game-winning field goal as time expired.

An elbow injury sustained during the 1991 preseason kept Montana on the sideline for most of the next two seasons. Montana's injury opened the door for Young, who won league MVP honors in 1992 while leading San Francisco to within a game of the Super Bowl. With Young now firmly supplanted as the 49ers' starting quarterback, Montana resurfaced in Kansas City, where he led the Chiefs to their first playoff victory in 24 seasons during his first season with his new team. Montana led the Chiefs back to the playoffs in 1994 before hanging up his cleats for good. That season, Young, who lost to Montana's Chiefs during the regular season, would lead the 49ers to their fifth Super Bowl title, with Young breaking Montana's Super Bowl record for touchdown passes in San Francisco's 49-26 win over the Chargers.

5. Perhaps the ‘coolest’ story of all: The one about John Candy

Younger fans may not know the full details of Montana's infamous John Candy story during the final stages of Super Bowl XXIII. With 3:04 remaining, and with the 49ers backed up on their own 8-yard line and trailing the Bengals by three points, Montana shared an interesting observation with his teammates as they entered the huddle, a huddle that was made even longer by a TV timeout.

Harris Barton, the 49ers' right tackle at the time, recalled what transpired in the huddle during an NFL Films documentary about the '88 49ers.

With Candy and the rest of America watching, Montana calmly led the 49ers 92 yards on 11 plays for the game-winning touchdown. The play, as well as his moment in the huddle, are now part of Super Bowl lore.

As the Official Hospitality Partner of the NFL, OLE’s epic pregame parties include everything from locally inspired food options and premium cocktails to high-end live entertainment. It's a once-in-a-lifetime opportunity that can only be experienced in person.

A lot has changed this year for OLE since the last Super Bowl, which was another huge success for the company. In January this year, just a month before the Miami event, entertainment colossus Endeavor closed on their acquisition of a majority stake in OLE.

According to reporting by Variety, the deal is said to be in the neighbourhood of USD650 million. The company was originally part of the NFL but has been owned since 2015 by RedBird Capital Partners, Bruin Sports Capital, the Carlyle Group and the NFL’s 32 Equity investment arm. 32 Equity will remain a minority partner and expand its relationship with the company.

‘By bringing together a leader like On Location with Endeavor’s access and reach, we can advance the way consumers and brands think about money-can’t-buy experiences,’ said Ariel Emanuel, CEO of Endeavor. ‘Partnering with the NFL will enable us to leverage the best-in-class executions around one of the biggest events in the world, the Super Bowl, and extend this same level of service and experiences to other sports and entertainment properties globally.’