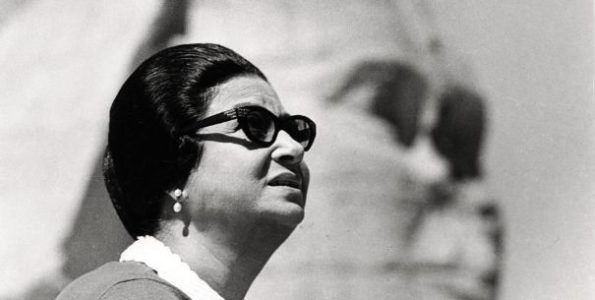 The Egyptian singer Umm Kulthum [أم كلثوم‎] is perhaps the best-known singer in the Arab world.

In the earliest years of the 20th century she started her career dressed as a young boy, singing in dusty wattle and straw huts to poor and deeply traditional farmers in the Nile’s Deltic villages similar to where she was born.

And when she died in February 1975 her funeral procession through the streets of Cairo attracted more than 4 million well-wishers who wanted a chance to pay their final respects to a singer whose transcendent performances over almost fifty years earned her the honorific Kawkab al-Sharq or Star of the East (كوكب الشرق]. She was often dubbed Egypt’s Fourth Pyramid, and her popularity was as keenly felt across the Middle East and North Africa as Arab self-confidence and self-determination started to develop.

Now fans of Umm Kulthum can see her live – albeit digitised and transformed into a 3D hologram – as part of a four-show concert series that starts tonight and is hosted by Dubai Summer Surprises (DSS) at the Dubai Opera House.

Umm Kulthum had a unique relationship with the United Arab Emirates, accepting a personal invitation from the UAE’s first head of state, the late Sheikh Zayed bin Sultan Al Nahyan, to perform a series of concerts to celebrate the country’s founding in 1971 and his fifth anniversary as the ruler of Abu Dhabi, pictured.

As a personal gift of thanks, the late Sheikh gifted to her what became known as the Umm Kulthum Pearl Necklace, 1,888 pearls arranged into nine cascading strands of natural pearls adorned with plaques of white gems and blood-orange and green enamel. After her death, the necklace and other jewellery were put up for auction and interests believed to be from Abu Dhabi purchased it, and it is now on exhibition at the Abu Dhabi Louvre.

New Dimension Productions founder and CEO Hasan Hina explained the work involved in bringing the legendary singer back to life: ‘The preparation of the Umm Kulthum material required long hours during which a team of 18 experts worked to develop the hologram and visual effects, in collaboration with a team of 30 technicians who set up the hologram equipment on-site.’

‘In recognition of her unique position in the culture and heritage of the MENA region, we are pleased to collaborate with the DFRE [Dubai Festivals and Retail Establishment], and [broadcaster] MBC Group to give the diva's fans a truly exceptional experience and the opportunity to attend one of her concerts and relive the feeling,’ he added.

In cooperation with Dubai Opera and other partners, DFRE is keen to adopt the highest safety and health measures, including disinfection and social distancing practices during the concert to ensure the health and safety of all the guests and staff. Such measures include extensive sterilisation, adherence to social distancing in terms of seat placement, as well as other precautionary procedures, a statement said.

The first show is tonight [August 6] at 2100 local time with two performances tomorrow [August 7] at 1830 pm and 2230. The event’s finale will take place on Saturday at 2100. As well as AED550 pp for VIP tickets for the venue’s 2000-plus boxes, general admission tickets are also available. In celebration of the Eid, the event will also include the performance of Al Atlal.

The Umm Kulthum hologram concert was to have taken place earlier this year as part of a regional tour that took in Jordan, Egypt, Bahrain, Tunisia, and Morocco but was postponed due to the coronavirus.